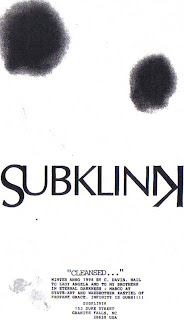 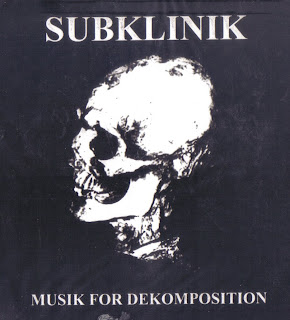 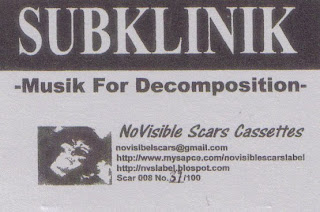 Browsing the forum boards a couple of weeks ago and found the cassette "Musik For Dekomposition" being advertised. Troniks / I Heart Noise forum board thingy. Something struck a chord in the sub conscious and I put pen to paypal and ordered a copy. It was whilst going through some LP's a couple of days back that I realised that I had a Subklinik track on the "Natural Order" compilation set that StateArt put out in 1997. (White Box copy). Damn good track too - so that information must have been sat there in the dark recesses of....for 13 years and the name pops up again.
Research time. Subklinik is the project name of Chad Davis (what is Chad short for)? from Mass. USA. The cassette (a one-sided C30) comes packaged in a 7" single sleeve with a transparent cover. Reminded here of the Controlled Bleeding cassette "Distress Signals" that Broken Flag put out in the mid 1980's. Infact the whole package has a sense of mid 1980's. Style and content. All "C"'s are replaced with "K"'s : "Extraktion Procedure" + "Final Dekomposition" as exhibit A + B. Back in the mid 1980's I flirted with a couple of solo projects / releases as A:A:K + The Streetcleaner. "D.M.P.K. - Dead Meat Packaging Korps" being an album title of The Streetcleaner with "Konvulse Kontrol" + "Produktion" being a couple of tracks. It was a sign of the times. S.P.K. and Nekrophile being shining lights to us all back then. Even Michael DeWitt gets a "thanks" in the credits on this release.
It is good stuff. It is damn good stuff. All the sounds, the dark swirling electronic sounds come from 20+ year old machines. It created a fog whilst I was listening to it and it all ended too soon. Apart from a couple of Zero Kama reissues I have nought from the Nekrophile catalogue anymore, this is a great reminder of those days. (1985/6). Strangely European for an American - file alongside Praying For Oblivion.