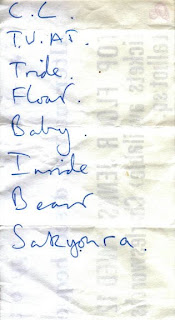 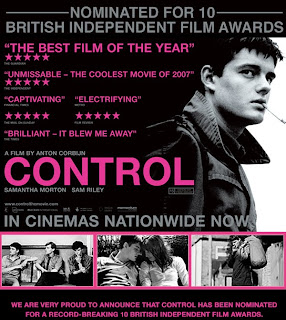 Saddened by the news of the passing of Larry Cassady I spent a few hours listening to Section 25 and that led me to listening to other Factory Records acts and dig out the DVD "Control".
I have no amusing anecdotes, or any anecdotes whatsoever about Section 25. When I went to see them live I held them in great reverence, I wouldn't even talk to them at the bar at the Porterhouse. In my eyes they had already attained god like status.
When I got to see them at The Porterhouse (Retford, Nottinghamshire) they were being supported by Crispy Ambulance and promoting the "Key Of Dreams" LP. On arriving at the venue we walked to the monitors to see if the "set" had been written and taped to the monitors. Section 25's set had been taped to the monitors and they were doing a new song called "Twat". Not a surprise for a group who had already released "Wretch" and "Girls Don't Count" we thought. As an aside I have never thought "Girl's Don't Count" as a misogynistic track. Full of humour and for a guy who got his first girlfriend (proper) at the age of 23 a kind of way of life!!
As myself and my mate Tim got front stage to hear Section 25 open with the new song "Twat", they began with "There Was A Time".....told you there was no amusing anecdotes.
"Control" is a good film. It kept me entertained for 117 minutes (approx). I think it is historically / factually incorrect but then again I've not read Debbie Curtis's book neither am I/was I a big Joy Division fan. I bought "Factory Sampler" EP for the Cabs tracks and fell in love with The Durutti Column through that, but then I became a collector of Factory Records and therefore had every Joy Div. release. (I collected Fast Product releases too, still have "Earcom 2"). I never saw them live although I had the opportunity on many occasions. I made up for it by seeing almost every UK gig by New Order;1981/83.
The film is well acted and I am to believe that the actors played the instruments and were Joy Division. Impressive stuff. If it comes on TV watch it!