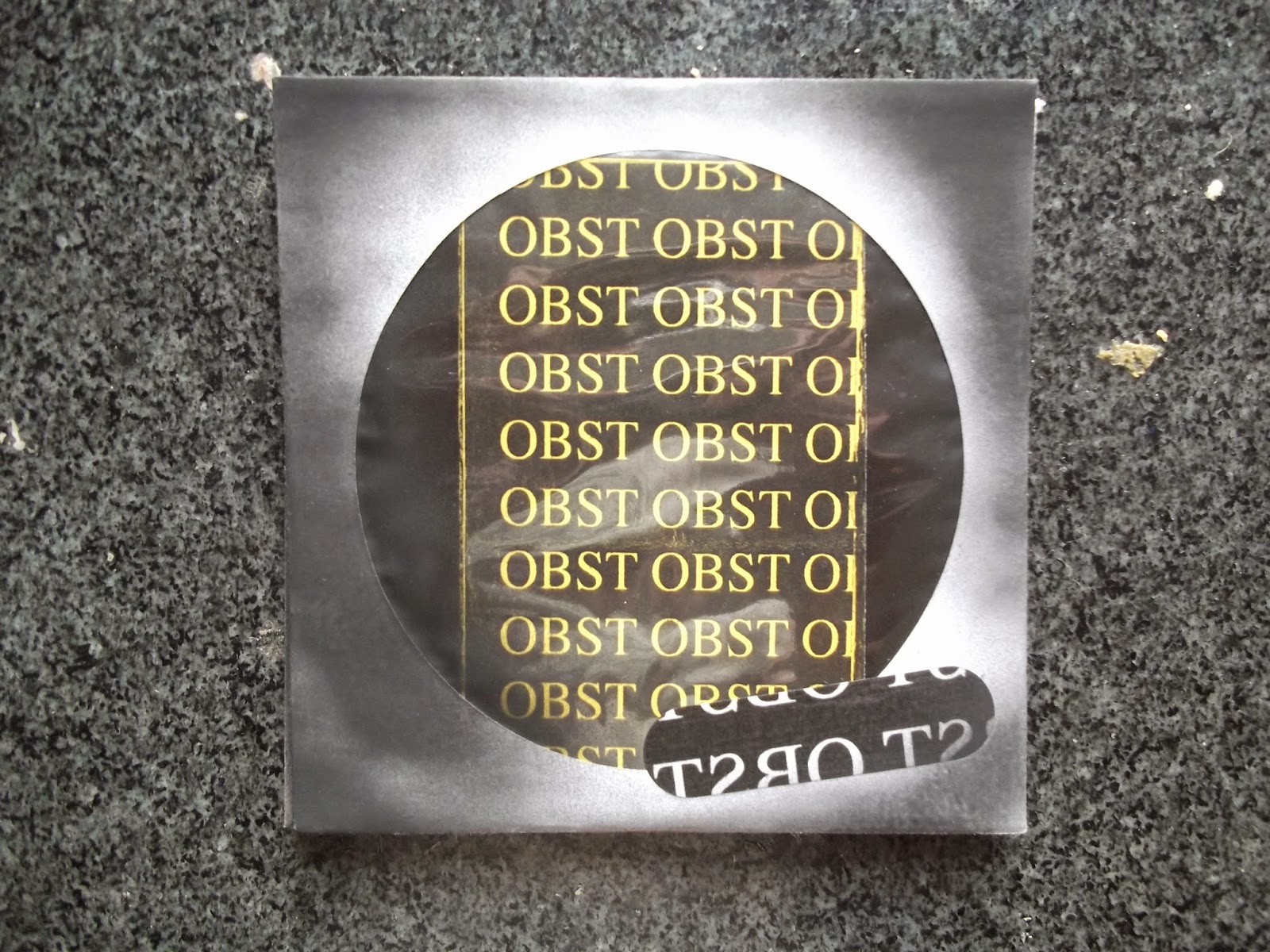 I have just spent a pleasant while listening to the latest release from Nottingham based project W>A>S>P>S. "OBST" is a CDR on Blood Diamond Music.
Last week I noticed this release on Discogs and saw it was limited to just 10 copies. I thought the chance of me getting hold of a copy would be slim but contacted the label direct and within days it was in my hands (and ears) and for the princely sum of two pounds. Blood Diamond Music is a UK based label and a splinter project from Blue Spectrum Tapes and operated by Simon D. Wilson. All new to me. The release was originally to be a cassette release but due to a shortage of funds it has come out on CDR with the cassette sleeve folded inside and the labels stuck to the CDR. Looks quite impressive.
I already have a few releases from W>A>S>P>S and the main man behind the project Ben Hallett. he also operates as Murder Cult, Kay Hill and S.C.K.E.// - all of which have been mentioned and discussed in the past. "OBST" is (I think) the fourth in a series called "Obsession Tapes" and is 17 minutes long. Both pieces are untitled with the first being the sound of amp noise speeding through the hemisphere. A very tense piece that sounds like the rape of an analogue KORG sequencer. Excellent stuff, sounding as if it could have been released by Broken Flag 30 years ago, but at the same time not sounding dated. The closest I can think is early MNEM or some Culver sounds. The second piece is the shorter of the two. An incredibly anxious piece with contact mic'ery afoot. The sound of tearing paper through effects and a random sequencer pattern is the main body of sound until some shifting / shuffling kind of buries the sound so all that is left is a random pulse. Brilliant stuff, a stand out piece. I suppose it is similar to the work of GX Jupitter-Larsen…nowt wrong with that.
Being limited to ten copies chances are that they're all sold by now but worth asking? (Copy & Paste): http://bluespectrumtapes.bandcamp.com/music

Simon also included a few more of his releases in the package, none of them to the standard of W>A>S>P>S unfortunately. R.J. Myato & Carl Krugers' "The Jefferson Bible" is just bad noise and pretty pointless and "Modular Demo" by Headboggle baffled me on first play. One for the readers of The Wire I think, with improvised electronics approaching academia. One piece had some nice loops building but they all cut short and go off into unlistenable nerdings and tweaks as if the artist(s) had no idea of the capabilities or control over the synthesisers, and thus reminding me of the monkeys and the typewriters trying to write Shakespeare. The second piece is pretty similar but (thankfully) less abrasive. Both releases are limited to 15 copies.
Also enclosed was a CDR from Knox Mitchell - the chap who tried to rip me off last year through his Green Tapes label and Shame, Exposure release, and when mentioned on this blog and the Special Interests forum board it seems he has a history of PayPal claims against him and seems to be quite proud of it - he is non apologetic in any way. Needless to say the sounds are bedroom wankery and the CDR has been destroyed - therefore this is a limited to 14 only release - and you'd be a fool to buy!