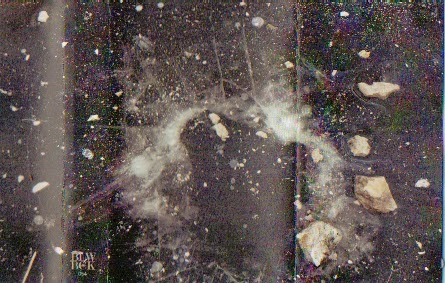 In 2012 I bought a tape via the "Special Interests" classified ads. A split release between Bulgarian project MyTrip and Costa Rican project EUS. At the time my knowledge of Bulgarian music was an old tape of Les Mysteries De Voix Bulgares and my knowledge of Costa Rican electronic noise was nil. At the time the MyTrip side blew my socks off - great dronescapes - whilst the EUS side was amateurish and tiresome, I never completed the 30 minute track. Since then I have followed the release path of MyTrip and their main protagonist Angel Simitchiev and some of his "side projects" such as Mother Spit and Z'ev Died Orchestra (it's a Star Trek reference, nowt to do with the industrial percussionist). My thoughts on these and his recent UK live appearance are littered throughout this blog.
I was a little surprised to learn that MyTrip had paired up again with Costa Rican outfit EUS for another cassette release, but as a collector of all things Simitchiev I had to buy. The self-titled split is on the Toulouse based BLWBCK label and like the first is a C60 cassette.
EUS is the project of Jose Acuña, assisted here be cellist Oliver Barrett. In two years EUS have improved and progressed, they sound like a totally different project to the 2012 release. One 27 minute piece called "Reviraje (Parts I-VII)" is a celestial symphony, a masterpiece of droneworks. Orchestral in sound with swirling strings creating a heavenly mosaic, masterly in construction - especially when the sounds suddenly drop into a solo cello before slowly ascending back into the heavens. Fantastic stuff. Part VII comes in a few seconds a the end of the tape … sounding like a section from the "Eraserhead" soundtrack. Whereas before hearing this piece I would not listen to EUS again - now I want to hear more.
MyTrip give us two pieces. "Life" with its windswept post-apocalyptic barren landscape feel is similar to the Mother Spit 3"CDR. "Less" is more sinister. More eerie, starting off at a very low place before rising out of the primordial soup and presenting a whirlpool of noise. At parts the sounds reminded me of T.A.G.c. and their ambiosonic research material and the ending is very "EVP" with its' disembodied voices notes from a seance type sounds. It does get rather messy at the end … but this is a great tape, well worth hunting out. Limited to 66 copies. Go to www.blwbck.com
Posted by Steve at 14:27