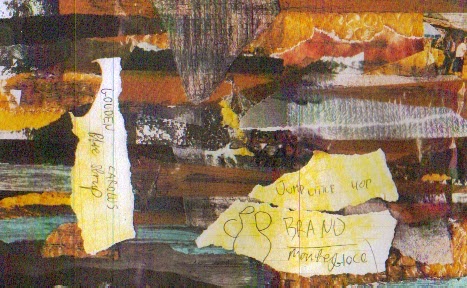 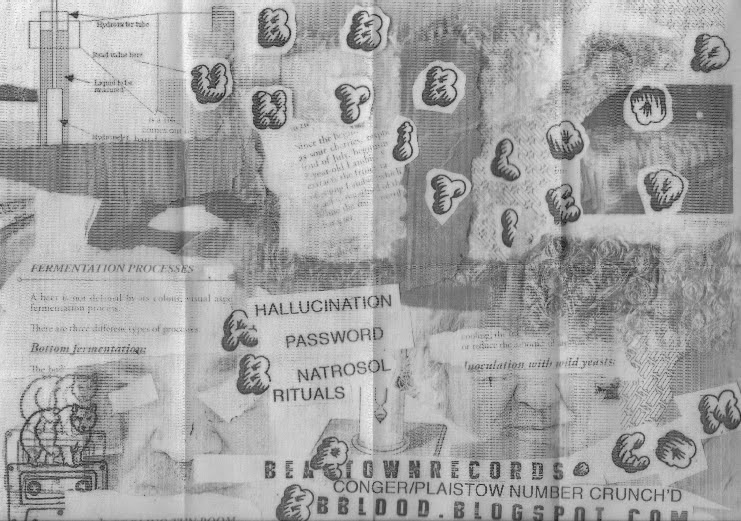 It was way back in 2009 that I first came across the work of BBBlood. I saw an advert on some noise forum board for the split release with the American project Al Qieda. two new names to me and on a new label called Trans-Dimensional Sushi. I liked the artwork (by Stan Reed) so I bought the single and thus began my aural love affair with all things BBBlood. A year later I was supporting the chap at a venue called The Others in Stoke Newington (London) watching him fold contact mic's into bubble wrap and eat them. Wonderful and exciting stuff.
Releases have been few and far between these past few months, or perhaps I am just catching up with the output? But one thing is now apparent, BBBlood has become quite prolific and unpredictable in sound. It has been fascinating to hear the BBBlood sound diversify and progress.
"Untitled" (how original) is the latest BBBlood release on Beartown Records. A C30 tape complete with vellum insert. Four tracks are listed but each side plays like one long piece, Side one is like the onset of madness where everything is blurred yet crystal clear in thoughts, action and sounds … Quiet suffering, apologetic cutlery, the flicker of empty film spools, waiting for the night bus on Gunnersbury High Street … Hallucination Password.
Side two begins with junk noise played at high speed and very high volume. Train wreck electronics that come of the rails leaving silence and the sound of a Tibetan Bowl being struck in the distance. The sounds try to rise phoenix like from the wreckage not to recover but short circuit and continue along the wire ..
Wonderful stuff, both sides are totally attention grabbing. BBBlood runs a blog and Beartown have a website, both are easy to find via Google (or Bing).
I think it is only a matter of time that (like Putrefier is now Mark Durgan and Cheapmachines is Phil Julian) the Baron Bum Blood himself becomes Paul Watson. (Gut feeling……great song).