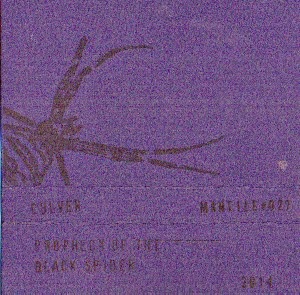 I have never purposely gone out to collect Culver releases - to do so would be nigh on impossible - but I seem to have a large volume of his work in my collection. Over the past few years Culver have released material on a variety of UK based labels such as Pjorn 72, Betley Welcomes Careful Drivers, Turgid Animals, Sick Head, Harbinger Sound, Blow The Reactors, Cosmic Slumber, Beartown Records, At War With False Noise, Blackest Rainbow as well as great labels such as RRRecords, Phage Tapes and Hyster Tapes as well as putting stuff out on his own imprint; Matching Head. Quite prolific.
The latest addition to my ever growing Culver collection is the biblically entitled C46 cassette "Prophecy Of The Black Spider" on London based Mantile Records. Two 23 minute untitled pieces. Side A sounding like a huge industrial spring vibrating through a myriad of reverb effect pedals, thus creating a bed of lo-fi low end bass rumblings. There is the random sound of a klaxon horn but all in all it is a bed of lo-fi rumblings and vibration. The piece just cuts dead too - no ending in site, just runs out of tape. I hate that!!
Side B kind of starts where Side A ended with a noise. A black thick syrupy sludge of noise which ( as you get settled in for twenty odd minutes of listening to a sound that is similar to trekking miles through swampwater) ends to be replaced by a crystal clear guitar, guitar playing backwards and forwards, notes being held and sustained, plucked and bowed building into an orchestral drone. It all becomes rather pleasant.

This cassette is devoid of information (as many are these days), but I do know it is limited to 50 copies and available through Mantile.  http://mantile.blogspot.co.uk