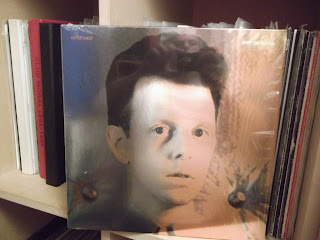 I have spent the last few days (great band) listening to lots of drones and Dilloway, and then I slipped on the new LP by Swedish project Optic Nest and it completely took me by surprise. A new kind of noise.
Optic Nest is the solo project of former Member Of Tinnitus and half of Cryme Daniel Fagerstrom. His latest LP is "Ride On Silver" - as in silver horses. "Ride On Silver" is a concept album. That's different from a themed album - this album is conceptual. Daniel is a silver horse riding through past times marking the moments that have changed his life.
I have heard some of Daniel's solo work before on the "Tapeworks" compilation cassettes that his partner in Cryme Mattias Gustafsson released a year or so ago, but this is my first exposure to Optic Nest. Opening with the title track the sound is very much of The Residents, Renaldo & The Loaf … Ralph Records. This "feel" lasts through Side A with its swirling synthesisers and floating flutes with a disguised (and sometimes incomprehensible) vocals. The LP does contain a lyric sheet - which is helpful as the vocals almost disguise the fact. Side B and the side is more "Eastern". The opening instrumental "Energy Organ Farce" takes us through a North African bazaar with its bongos and conga percussion (and a sequencer rhythm that is quite close to a DAF song whose title escapes me)…. "Two Moons" is undoubtedly the stand out track on the LP. The single off the album. And the first time the vocals are coherent. Again, a sultry "Eastern" feel with an excellent saxophone sound. The closing piece "Chromosphere" is rooted in Jimi Tenor territory. Very "prog".
The sleeve reminds me of a Jimi Tenor / Aavikko style release and mix that with the sound of The Residents, Tuxedomoon and Snakefinger and you have "Ride On Silver". I have no other LP that sounds like this, a well produced / constructed labour of love. Recommended.
I'm uncertain who is distributing this in the UK, but get in touch with the label at www.moptacodics.com  - P+P rates from Sweden aren't that bad.

The LP comes with a "free" CD version - and is printed on mirror foil card.
Posted by Steve at 15:58