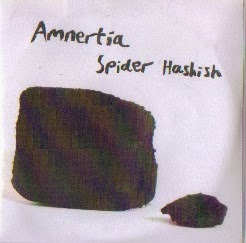 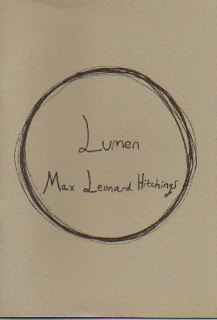 At the beginning of 2010 I was invited to play a gig in London, well not exactly London per se but a pub in the district known as Nunhead. The Ivy House. An old Victorian theatre turned in to a pub. Not a bad little venue but just a tad … remote. The evening was being organised by an outfit called Transient Constellations, an outfit that included Max Leonard Hitchings. Max was also in the group Lion Lies Down who were on the bill that night.
Over the next few years Transient Constellations have put on some interesting evenings in and around London, they've also become a small and compact label.
Amnertia is the solo project of Max Leonard Hitchings and "Spider Hashish" is his first release. A 22 minute 3" Cdr. The Cdr is accompanied with a small piece of fiction called "Luman". The two pieces are linked but can be digested separately .. which is good because although I have played the sounds a few times I have yet to start the book, I am a notoriously slow reader and "Friedrich" by Hans Peter Richter" is taking my time. The synopsis of "Lumen" is such;
"Lumen is a disquieting insight into the mind of a man for whom the boundaries between waking life and dreams become blurred in such a way that notions of free will, sanity and even the basic command of motor functions are seemingly replaced by paralysis, possession and delirium - all due to a moment of 'inspiration'."
The sounds are quite conceptual, very visual and very "electronic".
Four pieces beginning with "Glimpse Of The Twitching Veils", a slow starter where a synthetic insectual sound probes and makes spaces before becoming a huge groundswell, a tsunami of sound. Wailing ends the piece. "Spider Hashish" (great title) is a meeting of looped and random electronics. It is how I imagine circuit bending to sound like. A chaotic and addictive piece. "Limen" follows with (again) the sound of insects. A sense of unease. I mentioned the sound as visual, "Limen" brings in the carcass or corpse of a dead animal being devoured by insects shot in fast frame / rapid motion film. Seven minutes plus and very intense. "The Return, Changed" comes in with no respite or chance to gasp fresh air. This finale sounds like the previous three pieces layered and mixed as one.

Great sounds from an interesting man. Better than Lion Lies Down! I shall be playing some of this release on my next radio show on the 28th. I do not know if the release is limited but take a trip to www.transientconstellations.co.uk and have a look.
Posted by Steve at 15:33