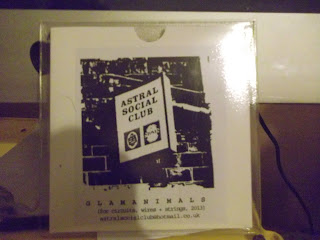 A clutch of new releases from Neil Campbell AKA Astral Social Club, AKA one of the busiest men in show business! First to play on the hi-fi is the 23 minute CDR "Glamanimals". This is the third in an ongoing series of Astral Social Club extended plays that also includes "Scudding" and "V.E.N.U.S".
"Glamanimals" kicks off floating somewhere between a Chris & Cosey studio out-take from the late 1980's, elevator muzak, Popol Vuh and the chill out room at G-A-Y Disco. Around a third of the way in to the journey and the sound morphs. We are now riding the Japanese bullet train. Locomotive rhythms and electro-noodles. Half way along and we're squelched and travelling backwards, back on to the Mirfield dance floor. Throbbing bass beats and handclaps. Slowly it all descends in to a disco fug. "Glamanimals" ends beatless as machines talk amongst themselves Neil Campbell - a 21st century schizoid man - recordings of automata - manifesto for astral socialism. Superb.

Astral Social Club has a big cartel page - go and buy. Neil has also put up his back catalogue on band camp and is available for donations. Be generous - this man's a treasure!
Posted by Steve at 16:51