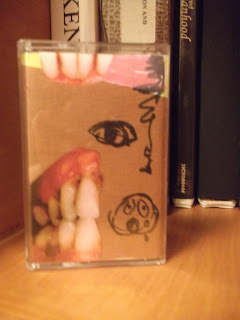 Have just spent a pleasant while listening to the cassette "Blunders" on Hissing Frames. "Blunders" is a split cassette (a C52) by Stuart Chalmers and Robert Ridley-Shackleton.
Stuart has just released a CDr album on the South-West based LF Records label, it is crystal clear plunderphonics - short pieces / sketches and sounds I just can't get my head around. "Blunders" on the other hand sees Stuart being more "lo-fi", less experimental and more cognitive, although the first track (first of three untitled pieces) can be classified as musique concret. There's an underlying vibration of tape being pulled slowly through the machine, oscillations and variations in speed, the clattering of pots and pans and other kitchen utensils give it all a Jackman, Scratch Orchestra, A.M.M feel. The second piece is the sides' magnum opus. Lo-Fi in extremis, dirty loops layer and build into mechanical rhythms giving the piece a 1970's industrial feel, it's a joy to listen to it all build into looping madness. Sound source? Office printers, contact microphones and drains? By the end everything is in the red and I feel like playing some early Nocturnal Emissions. The last piece is a five minute wind down. Slow paced, spacial and eerie with a sci-fi soundtrack feel. Excellent stuff.
Robert Ridley-Shackleton presents one long piece that sounds as if it could be longer, but the tape just ends .. I hate it when that happens. Robert, it's a C52 tape release...you have 25 and a half minutes to create a piece use the time correctly! Again "Untitled" is a great listen. Starting quietly, minutely. Short-Wave Radio interference and dead air space floating around the room. Ten minutes or so in the piece does start to wilt but it's saved by some great low synth oscillations. It's excellent stuff from an artist I know nowt about...and then it ends. The "play" button clicks...and it's back to Stuart Chalmers.
"Blunders" is a great tape, worth a listen. It is still available for a fiver from www.hissingframes.blogspot.co.uk