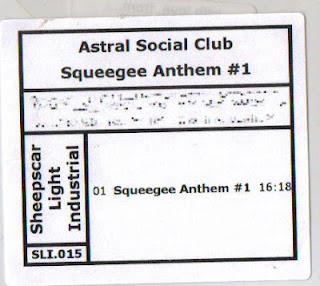 I have just received a brace of 30 bob trips from the fine Sheepscar Light Industrial label. I am saving Phil Julian 3" for later, but I've spent the past couple of days playing the Astral Social Club release "Squeegee Anthem #1". The track starts with some gentle guitar strumming and plucking...could be Neil playing along with the kids..before the beast is awoken. A drifting phazed amp noise enters and brings with it electricity. Strings. Electric strings, multi layered strings and multi layered effects.
A few minutes in and there's a "rock" beat playing underneath, could be Blue Cheer, could be Montrose, could be Showaddywaddy*, I don't know but the drums try and burst through but are shielded by multi multi strings madness.
A couple of years ago I saw Astral Social Club live in a field on the outskirts of Cambridge, by half way through "Squeegee Anthem #1" the memories come flooding back.
Eleven minutes in and we are full on rocking, wigging and scudding along sounding like a late '90's Skullflower jam. And then it ends...cuts dead, no fade, no come down...just ends. I think the track deserves an ending, but there y'go. Another instant classic from Astral Social Club - the first of 2013 and big thanks to Sheepscar Light Industrial for releasing it.
Please visit www.sheepscar.blogspot.co.uk and buy this beauty, available for any price above £1.50 and also available as a download (why on earth you'd want one though...etc etc). "Squeegee Anthem #1" is limited to 50 only, so act fast!!


* I don't think it is Showaddywaddy.