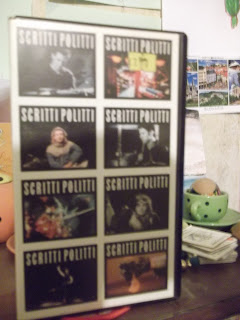 Out and about in the Saint Marychurch charity shops the other day (that's Thrift Stores for our American readers) and I came across the VHS Video "Scritti Politti" for ten pence..it had to be bought. I am partial to a bit of Scritti Politti, I have the first couple of 7" singles and the 12"EP "4 A Sides" is a classic, so I thought it worth a 2 bob punt.
Back in the late 1970's there was a documentary on BBC 2, some sort of "community TV" programme where members of Scritti and Desperate Bicycles talked about how simple it was to make a 7" single and get it distributed through shops like Rough Trade, played on the John Peel Show and the classified ads in the music press. Great programme, being community TV I could write in for a pamphlet with all the details discussed in the programme..all for the price of a stamped addressed envelope. I did (of course) and shortly afterwards formed the group ESP Disk~rd with my mate Dave. The cost of producing a 7"EP was still way out of pocket-money and saving was out of the question back then ... there were too many great records to buy and bands to see for goodness sake! Savings?
The programme proved Scritti Politti as an important force in DIY / Post-Punk music. Myth busters. File alongside This Heat and Lemon Kittens.
Then along came the 1980's and something happened to Scritti Politti, they decided to make money. This video is a document of that occurrence. It's awful .. like watching Adam & The Ants and ABC, two former giants in the 1970's post-punk sound, perform on "Top Of The Pops", and strangely enough I knew folk at the time who bought it - they actually went out and bought the records, liked it - or at least said they liked it - danced to it at gigs .. Of course I am sure they would deny it all now.
The video has the "Wood Beez" video - the one with Michael Clark dancing around some bee hives whilst Green Gartside sits on silk sheets and mimes. It is saccharine - the image, the sound, the lighting, all saccharine. All the other videos (all five of them) are incredibly static with Green either stood still or sat down. No movement...which I found strange seeing that they were producing vapid dance music. It is all very 1980's. Shell Suits and bad hair. Thankfully (like Adam Ant and ABC and Thompson Twins) it all went big tits up for Scritti Politti quite quickly...but this "Absolute" rubbish did spoil their (his) earlier work.
Nevermind. It was worth 20 minutes and ten pence and my three year old daughter liked dancing around the coffee table to "Wood Beez". Last year I bought a New Order video "Substance" a collection of their late 1980's singles from "Animals In Distress" charity shop (again for ten pence) and that was a waste of money...I would rather watch an animal in distress than that videotape again!
Posted by Steve at 20:28