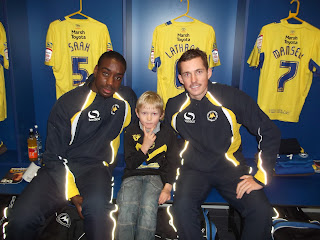 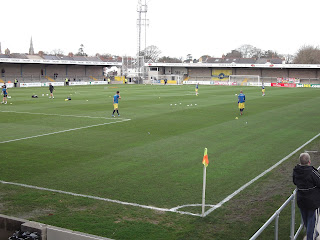 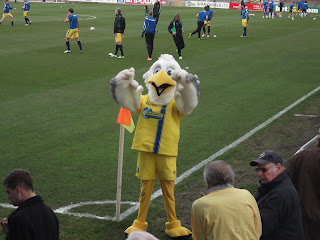 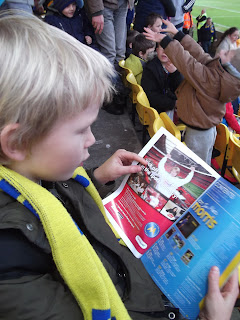 Back at Plainmoor, home of Torquay United FC to see them get thumped 4-1 by Southend United. My son Oscar was invited by the club's Community Football coaches to spend a day with Torquay United .. he plays football for his school. It was a great day out, especially for me the football mad dad. It may surprise some to know that I did use to play a bit back in the day (that day being the 1970's) and that I even made it to play at county level. But this was Oscar's day and he fully enjoyed the trip round the ground, the meeting the players and coaches, watching TV on the big screen in the VIP bar etc.
Last time we visited Plainmoor we stood in the freezing cold of a January afternoon, this time we were granted a seat (near the bar)! Joy. The match itself was entertaining for the neutral (me). Southend United were in the lead within ten minutes, an impressive goal by ex-Torquay United striker Gavin Tomlin. For Torquay it was downhill from thereon in, they were in all honesty bloody awful and quite appropriately playing "schoolboy" football. Kick n' rush. Southend United on the other hand were a well organised unit who seemed to have a game plan. It was easy to tell that they were managed by a top (and seasoned) coach in Paul Sturrock. Although (and indeed despite) losing heavily two of the best players on the pitch were Torquay United defenders; Brian Saah and John Osatler, but the Torquay United right back Kevin Nicholson had a 'mare of a match.
Oscar and I shall return again when the weather gets a little warmer ... it's great fun!

Pictures.
1: Oscar with Brian Saah and Damon Lathrope. (Pre match team talk)!
2: Torquay United warm-up.
3: The Mascot - it's a seagull...not a chicken.
4: Oscar has a half time read.