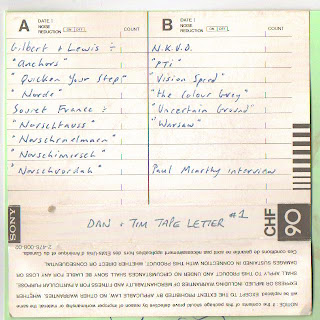 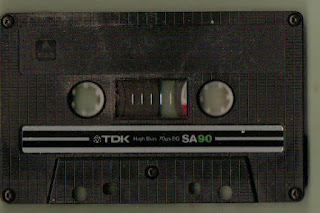 This cassette is probably the oldest tape I own. It was mailed to me shortly after the Hulme massacre (AKA "the burglary that cannot speak its' name") in 1983.
It certainly is of its time, as it is a "tape letter" mailed by Tim Bayes and Dan Plunkett (of ND Magazine) in the early months of 1984. Tim was over in Texas at the time and tape letters were a great way of communicating. My tape letters were usually me talking in between tracks like a bedroom John Peel, whereas Tim's tapes (as a rule) have him speaking at the beginning and end of Side A, then that is all....social networking in the early 80's.
With the amount of (house) moves I have made since 1984 it is a bloody miracle that I still have this cassette, but it has stuck with me through thick and thin. I remember the day it arrived, the cassette was packaged with a series of Dan's "Mail Art" and Texan newspaper cuttings ... and the jiffy was packed with small paper circles, like Dan and Tim had emptied a two-month supply of "used" hole punched paper into the jiffy. They went everywhere upon opening. Buggers.

The cassette kicks off with Tim and Dan talking about how stiflingly hot it was in Austin, Texas and how the air conditioning unit had busted. Interesting stuff, eh? Before the 1980 Peel Session recording of Gilbert & Lewis comes in and the track "Anchors", this track later became "Ends With The Sea" and one of 4AD's better singles.The tape then has a little bit of Tim trying to get his (then) partner Anne to say something into the microphone before Dan comes on and introduces Soviet France and the "Norsche" 12"EP.
This tape got me interested in Soviet France. I had originally bought both the "Garista" tape (covered in creosote) and the "Untitled" 12" (otherwise known as the "Hessian Bag" record) but not been overly enthused by them. Packaging over content type of attitude. The tracks on this EP totally blew me out of the water - a great surprise, with a more "tighter" and ritual / rhythmic sound. At that time (as of now) Soviet France were producing the sound I wanted to listen to. Inspirational. I (still) have no idea where the sample voice that begins..."Where is he, that is born king of the Jews"....comes from, for some reason I thought it might be the Reverend Ian Paisley, but somehow and now I think not.
The following Giro day I rushed down to Virgin Records in Manchester to buy a copy, but they had sold out...but luckily "Mohonomische" was in there. This is my all time favourite Soviet France release, and I didn't stop buying Soviet France records for the next four years.

Side B has five tracks by NKVD/Heute. The tracks may (or may not) come from a cassette called "Prior To Intercourse". I have looked over the internet to find the source of these tracks, some that have very DVA style titles, but have had no joy. The tracks last 30 minutes and are built of primitive synth sounds. No vocals or tape splicing or any other instrument, just pure free form synthesizer meanderings. Obviousluy influenced by Krautrock - Tone Float, Tangerine Dream etc and maybe Richard Pinhas and Ron Geesin....I don't know. It sounds a little like The Future and Clock DVA material that appears as "Lomticks Of Time" on the recent Vinyl-On-Demand compilation. It's fascinating stuff. The tape hiss plays a part.
After NKVD there is fifteen or so minutes from The Residents 1977 Xmas Radio Show. For some reason I didn't write it on the sleeve.
I have no releases by The Residents, never have...it's not that I don't like The Residents it has always been a case of not knowing where to start and then just "making do" with tapes that friends have made...never any urge to go out and buy their catalogue. Sound quality on the tape has deteriorated somewhat, and this part of the tape was always "hissy". There is a version of "Santa Dog" and a loop that goes "Kick The Cat Today", but other than that I have no idea....

The cassette came without track listing or sleeve, just what Dan says he is going to fill the tape up with before the Soviet France EP, and he does mention putting on some live Pere Ubu but there is none on here. The tape finishes with a small interview with Paul McCarthy, and the time he worked with John Duncan. Fascinating stuff - Tim also mailed a cassette with Paul reciting a poem called "Boston Bay" that is one of the best things I have heard...ever.

Like I mentioned before, I don't know how throughout the last twenty eight years this cassette has stuck with me, I guess I'll have to be buried with it. It remains a treasured tape.
Posted by Steve at 15:16