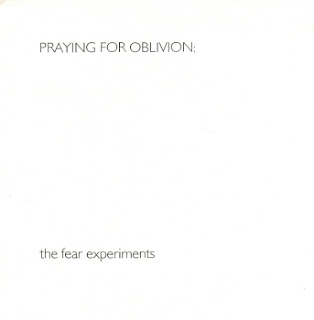 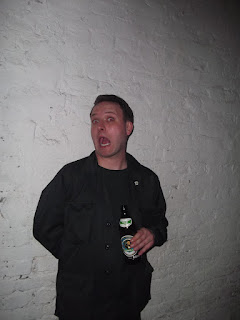 Have just spent a pleasant while listening to "The Fear Experiments", a 7" single by Praying For Oblivion. I have had this single on and off my turntable throughout March, and it has slowly grown into a classic.
A few months ago I bought the Praying For Oblivion cassette "Aktion T4" on the US Phage Tapes label, an excellent release of PFO material from 1999, and material reworked by N.Strahl.N in 2009. So now I am intrigued to hear "early" Praying For Oblivion releases, when they were a two piece based in America, when they were Andrew Seal and John Sharp. That is the John Sharp of Blazen Y Sharp fame.
"The Fear Experiments" features two instrumentals (PFO are much better at instrumentals) - one studio and one from a live performance on the 23rd of October 1999 in Tennessee. It could well be the same track twice - one studio, one live. The sound of "The Fear Experiments" is one of taught wires, stretched springs, bass tone rumblings and scraped strings. Very close to the sound being put out by Nekrophile Records in the late 1980's. It came as a great surprise....I did not know what to expect, but I didn't expect it to be this good.
The single was put out on the PFO label Final Judgement.
If you see this single on lists or on distro merch' stalls at a live gig somewhere then buy, you won't be disappointed. I know I go on about the great sterling/dollar exchange rate at the moment, but I bought this 7" from Carbon (US distro' outfit) for around 50p.....P+P was more than the vinyl!