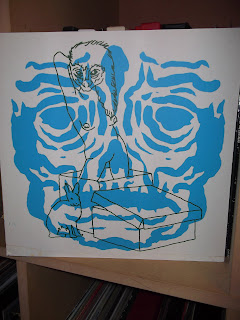 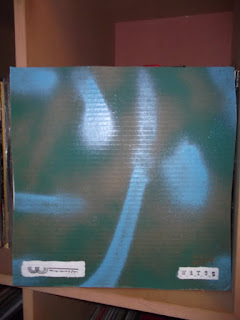 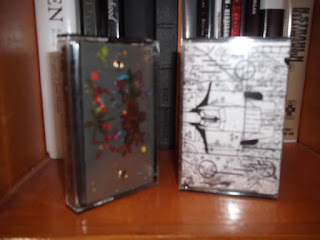 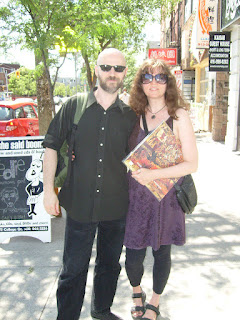 Proving that dadaism is alive and well and living in the 'burbs of Toronto, Six Heads bring us "Cardboard Oracle" a 12" 33rpm LP released by Wintage Records&Tapes.
Side one is entitled "Smaller, Larger, Lighter (Incantation Of The Naugahyde Witch)". A fifteen minute track featuring (and this is guess work) Chinese thumb piano, radio interference, singing bowls,cheap battery powered keyboards,contact microphones, turntables, tape decks and a general bastardization of cognitive sound as we know it.
Side two is entitled "Carnival Dust" and lasts one minute longer. The sound here begins with a bass rumble and what sounds like the grinding of teeth before Dr. Phibes enters on his wurlitzer organ. The sound is then experimented on - various pitches, equalizations, tones, spaces etc. A cacophony of nightmare undulations. Excellent (fascinating) stuff. "Carnival Dust" presents a sense of unease.
Both pieces sound as if they could be from live performances, but the recording credits list three locations used over a two year period. Masterful editing.
I am already in love with this LP, and I've only had it a couple of days. (I have also taken advantage of the sterling/dollar exchange rate and got copies of a couple of Six Heads cassettes: "The Popeye Scat" and "The Official Bootleg"). The LP is packaged in between to old pieces of cardboard - my cover being a recycled Tony Banks LP! The Toronto record shop "She Said Boom" is given a thanks in the credits so I can guess where the old LP sleeves come from.
If you like (Early) Nurse With Wound or irr. app. (ext) the Six Heads are yours.

Six Heads stuff can be found at William's website: www.recordism.com and contact Kevin Crump of Wintage at wintagerecords@gmail.com and get some Six Heads!