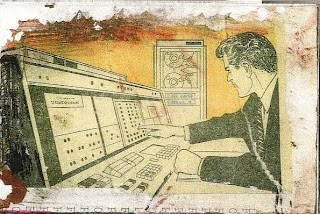 Have just spent a pleasant while listening to the split cassette from Kanttoripoika and Re-Clip on the Finnish Tarjous-Edits label. It was released in 2009 and copies are still available from the Hyster Tapes distro' page. (www.pcuf.fi/~plaa/hyster.html).
One of the highlights of last year was getting the Kanttoripoika/Re-Clip split 7" on the Finnish Record Deals label - a classic from 2010. (I'm behind the beat, I know.....). The single is best described as "Mutant Disco".
Now, I maybe wrong but I am to believe that Kanttoripoika is a solo project from a member of a "rock" band called Witch Christ, and their name is actually Kapo. But, I could be wrong. Kanttoripoika present five instrumental tracks all with Suomi titles, so I have no idea how to pronounce them never mind knowing what they mean. All five pieces are different. Electro-noise opens the tape which blends into "Majesteetti (Hidas)" a sub Martin Denny lounge jazz style piece with electronic marimbas and vibes. Excellent listening. "Sulkapallo" sounds like Aavikko in their "Derek" / Bad Vugum stage. Think of the club band in "Phoenix Nights" if it was set in Turku and the band were on speed! I love Aavikko so Kanttoripoika can do no wrong here. The side ends on sub psychedelic-jam style piece called "Vasten Auringon Siltaa". 20 minutes or so of excellent listening....with this cassette came the Kanttoripoika and Deva Planeta split cassette on Planet City, tomorrows listening...looking forward.
Re-Clip is a member of Grey Park, who for the past twelve / thirteen years have been putting out some of the best sounds around. FACT. Here Re-Clip presents seven sketches, short pieces - like a work in progress piece. Re-Clip's sound is one of spaces and fitting electronic noises and beats around them. The closest description I can think of is "glitch-musik". Like Raster-Noton stuff, or Oval and even fellow countrymen Pan Sonic, but a little bit more lo-fi and analogue. Make sense? It's a great sound and I'd love to hear more, but I'm finding Re-Clip stuff sells out pretty damn quick!
Anyway, this beauty is still available and costs 4 euro - the split 7" is only 3.5 euro and both from the Hyster Tapes distro.
Posted by Steve at 20:11