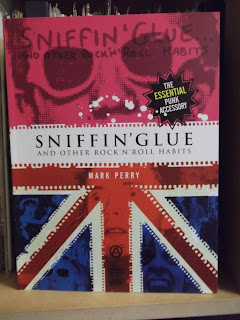 I love music biogs. Be it about a genre, an artist, a movement, a town or whatever - I just love a good music biog. I could quite happily read an autobiography by David Cassidy or Gary Glitter or the excess stories of Lemmy or Led Zeppelin...and have, but it is the books on punk, post-punk, new wave noise (call it what you must) I like the best.
At this moment in time I am devouring the Bill Nelson/Be Bop Deluxe biography "Music In Dreamland", it really is an unputdownable page turner...but I digress. This Christmas holiday I read "Sniffin' Glue + Other Rock 'N' Roll Habits" by Mark Perry. I have mentioned earlier how much I admire the musical/lyrical work of Mark Perry - be it with Alternative TV, The Reflections, The Door + The Window or simply as a solo artist - so I thought it was time I sat and read one of the "things" he is most famous for; "Sniffin' Glue" fanzine.
The story of "Sniffin' Glue" is known by all (surely)? The summer of 1976, Mark Perry a London based music fan is bored of the music weekly so decides to start his own little "'zine" about the London music scene and report on his favourite records (mainly US imports) and gigs that he goes and sees. "Issue 1" sells well, and Mark enjoys the experience so carries on .... Punk Rock explodes in London and Mark is there to report on it all. The bands, the music, the clothes, the venues etc....stuff that the weekly music papers just did not want to know.
In 2009, 31 years after the last "Sniffin' Glue" Mark decides to put all 12 issues together in a big A4 sized book...and write the introduction. Good stuff. The cover claims the book to be "The essential punk accessory", a fair claim but I don't think the book is any more essential as (say) Bob George's "International Discography Of The New Wave" or "No More Heroes" by Alex Ogg. The "The" is a bit strong.
Before starting this book I had never read a copy of "Sniffin' Glue" (or "Ripped & Torn" or "Kill Your Pet Puppy" come to think of it). 1976/1977 fanzines never made it North to Lincoln. I think buying "Chainsaw" through the classifieds in "Sounds" was my first foray into the fanzine. I read this book in the voice of Mark Perry. I read it with a Sarf' Lahndan drawl. I read Bill Burrough's books in his voice too - can't help it. The first few issues deal with Mark's admiration of The Ramones and The Flamin' Groovies and MC5 and The Stooges....East Coast US rock, Issue 2 and Mark is catching onto Eddie & The Hot Rods and The Damned and starting to enjoy live gigs. The Stranglers, Sex Pistols etc. The writing is blunt - say what you see style writing, no waxing romantic or lyrical like the journo's on the "Melody Maker" or (worse still) "NME" payroll. Fun to read.
As the 'zine starts selling Mark gets a writer called Steve Mick to assist in interviews and reviews, and Harry Murlowski becomes the "Glue" photographer, and bands like The Clash and Models and Buzzcocks appear on the circuit and they all get interviewed and reviewed and the "Sniffin' Glue" offices move from Mark's house in Deptford to the Rough Trade Record shop, then Mark gets asked to run a record label by Miles Copeland and the offices move again to Soho and Miles Copeland's office and the magazine takes on full page adverts from Mile's record labels such as Step Forward, and Illegal and Phonogram get adverts in there and Mark hands the editorship to Danny "Pets Win Prizes" Baker and unfortunately within twelve months the 'zine has run out of spunk...still it's a fast and furious story and (as I keep on bloody saying) a good read.
I did think that there would be more information on Alternative TV...I thought Mark Perry would have used the 'zine to forward his musical project...but no..and fair play to that. I also thought that there would be some Throbbing Gristle live reviews or news but apart from a one-page advert for the "2nd Annual Report" album there's nowt. Never mind.
Also I would like to say that I have nothing against Danny Baker, I like him and I never missed an episode of "Win, Lose Or Draw" when he was the host. (Didn't Bob Mills take over from Danny)? and I still listen to his Radio 5 Saturday morning show when I can - the guy invented "6-0-6" - unmissable radio! Anyway to save going off on a tangent - if you want to know the history of punk rock in the UK then this book is a necessity and it cheered up my Christmas.

Spurred on by the 'zine scene I did attempt my own back in 1981. It was called "Hamburger Lady" (pause for laughter). I cannot remember much about the content. There would have been a lot of record reviews - perhaps a Retford Porterhouse of Nottingham Rock City live report. Myself and a friend (Drew Cormack) did go and interview some women, some CND women, who were camped outside RAF Waddington because it was the kind of thing that was done back in '81. Greenham Common and all that. Looking back at it I think we were after booze, drugs and maybe a free CND badge! For some reason I typed the thing up on some A3 sized "Gestetner" paper that cost alot of money from Ruddocks (Lincoln's answer to Ryman's or Megson's in its' day - they sold vinyl too), I think my father (who was a solicitor) had a "Gestetner" printer in his office...but because I could not include photo's or free hand graphics I kind of gave up and "Hamburger Lady" died.
Posted by Steve at 21:16