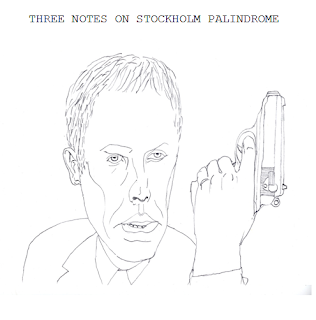 Have just spent a pleasant while listening to the latest release from Grey Park. "Three Notes On Stockholm Palindrome" released by Finland's finest - 267 Lattajjaa.
The packaging remains true to the "Secret Agent" series that 267 and Grey Park have been putting out over the past five years...this could be part of that series? I could be wrong though...usually am.
I have been listening to Grey Park for nearly twelve years now, after a chance meeting at a Dieter Muh gig in the outbacks of East Finland in 2000 I have become a friend and correspondent to members of Grey Park. They will be one of those great "unrecognised" bands of the 21st Century - I don't think that this will concern them...in fact I am damn sure it won't but their sound, their aural / sonic experimentation is a necessity - at Hartop Towers anyway.
"Three Notes On Stockholm Palindrome" is about half an hour of enjoyable listening. It starts with "M.T.T2010". A track compromising of; Industrial hum. synthesizer bursts, shortwave radio, found sound, field recordings, amp noise and what sounds like someone walking around Helsinki market on a very windy day. It's very involving stuff and a times very reminiscent of This Heat. Track 2; "2.2.T.P.A." is a short four minute piece of tonality. A drone that could have done without the pitch shifting. Strangely enough listening to this track reminded me of old I.B.F. tracks where Tim and I were "jamming / improv'ing" along and everything was just right and for some reason I'd modulate the speed button on the Korg Synth' and that would be it (for me)....track ruined. "2.2.T.P.A." has one of those moments. The third and final track is called "F.A.F.O.D." and begins like a Mariachi Band descending into madness - it crumbles into a sound-piece of multi-layered radio broadcasts...spoken word...a new face in hell. Before over complicating itself, verges on breakdown and unlistenability and decays into a noise that can only be described as "interference". Absolutely brilliant and why I listen to Grey Park.
Their last CD "Wet Amen" was a tad of a let down. Grey Park are a collective with a constant of Plaa, Tommi and Nosfe. "Wet Amen" had a few more collaborators on board. Perhaps Grey park work best when they are down to their bare bones?

Re-Clip has become an addition to the Grey Park line up and I have just been listening to a track of his called "Easy Dub" from the split cassette release with Kanttoripoika on the Tarjous-Edits label and my god it sounds like "Small Black Paris" - an early track by Grey Park.