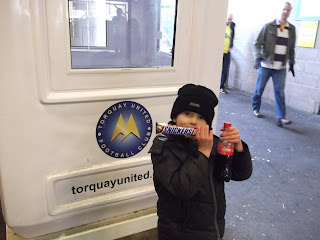 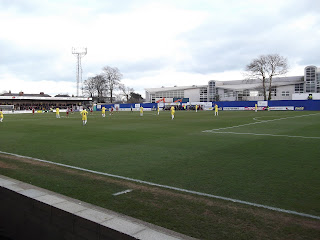 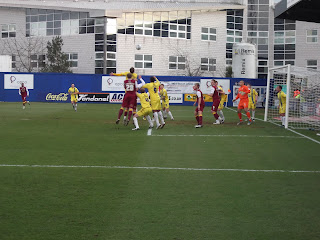 "Sport, Sport, I like Sport. Running and Jumping I'm The Physical Sort" as mighty Stukas once sang.....
Number two son (Oscar M) has just started football training at his school and he's quite taken to the sport so I decided to take him to watch the local team in action. When I was six years old my father (I know that will surprise a few people...I actually do have one) used to take me to watch Lincoln City FC a couple of times a month, so I suppose it only correct that Oscar gets the same opportunity - to watch lower league football that is!
Torquay United play their home matches at Plainmoor, a ten minute walk from Hartop Towers, and yesterday they were hosts to bottom of the league Northampton Town. I paid the £23 entrance and we stood amongst the home fans in (what is known as...but I have no idea why) The Popside. Oscar was delighted that he could drink Coca-Cola and eat chocolate whilst watching football!
This was the first football match I have been to since watching Notts County take on Lincoln City at Meadow Lane in 1997. Not exactly a regular! Torquay United are doing well, heading for an automatic promotion place whereas Northampton Town are heading for the Conference league and football oblivion. They both played like it too. The ball seemed to spend a lot of time in the air, and the times it was on the ground it was being kicked up into the air. Torquay have one of those centre forwards (Rene Howe) who holds up the ball before passing it to the oncoming midfielders, but (in this game) the midfielders didn't seem to want to come. Eunan O'Kane and Ian Morris tried a couple of times to run with the ball, take on Northampton's defence but they just weren't too good at it. Northampton Town had an awful player called Lewis Young. He kept making shitty passes and losing headers and then staring at other players as if it was their fault and not his. He'll probably go far! Torquay won by the single goal, a header from a set piece by Mark (Man o' the Match) Ellis.
It was bloody cold stood in The Popside, and I felt sorry for the linesman who was getting stick from the "Yellow Army" every time he made a decision against Torquay United. He was slightly red haired so was getting the "Ginger Cunt", "Blind Bastard" and "Scottish Twat" (?) comments shouted at him. Luckily the shouting went (literally) over Oscar's head!

Next time we go - and we will go again because both Oscar and I had a great time - I'll buy a ticket for a seat in the family stand.

Pictures:
1: Oscar and his booty from the pie shop! (Didn't quite cater for vegetarians on a low cholesterol diet).
2: Kick Off.
3: Goal mouth action.