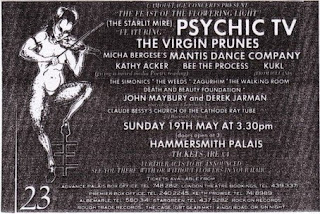 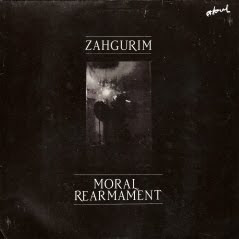 Just spent a pleasant while listening to the LP "Moral Rearmament" by Zahgurim. Released by the German label Atonal Records in 1985. I've had this LP for a couple of years, think I got it from Discogs...can't quite remember. I remember seeing them at the "Feast Ov Flowering Light" all day event back in 1985 at Hammersmith Palais and never having bought the LP on release, curiosity got the better of me. I also (around the same time) bought a CD by Death & Beauty Foundation and that is close to bloody awful.
The LP is a strange beast. In a way very minimal. There is a lot of effects and machinery, but not much instrumentation. The recordings are over 25 years old, but their sounds haven't dated. What it does sound like is Bourbonese Qualk. It plays like a "missing" Qualk release. No surprise that Simon Crabtree and Julian Gilbert are listed as producers, from experience Simon is a very "hands on" type of producer. The LP opens with "Dropkick!", which owes more to the Gamelan sound than Qualk. Very 23 Skidoo, very "Culling Is Coming" (Probably one of the best albums ever made). This track leads into "New Flesh" and "The People's Temple" which have that shouty shouty vocal, space-echo treated scratching strings and Dr. Rhythm beat that Bourbonese Qualk were "famous" for. Think "Laughing Afternoon" or "Preparing For Power" and you are close to the sound of Zahgurim. "Panstwo" opens side two. Panstwo is Polish for The State, and Steve Tanza of Bourbonses Qualk had a project called The State...things are getting a little bit incestuous here. "Panstwo" has readings, it is constructed in the same way as Psychic T.V.'s "Terminus", the ambiguously titled "Shower Scene" follows. (Death Camp Psycho Sex Scene). "In The Shower You Are The Toy" seems to be the repeated vocal here and as with the final track, the instrumental "Two Women" the music is Qualkian to the max.
On hearing the LP for the first time I was surprised as I seem to remember them being all thigh bones and Tibetan Bells at the Feast.
As far as I know Zahgurim were Paul Ackerley and William Vince. There could have been a third member called Andrew Wadsworth, and they were either from Sheffield or Dewsbury. Yorkshire then? Aye. Paul went into Left Hand Right Hand with Karl Blake. William and Andrew.....who knows.

I think that the LP was recorded at Malt Street in New Cross, London. That is where Bourbonese Qualk had their squat & studio at the time. I recorded there as a member of IBF (Ideas Beyond Filth) in January 1986, recording a track for the "Songs Of The New Internationals" LP. Simon Crabtree was our producer and ended up playing Moog Synth on the track. We were also going to use the "studio time" to record the IBF song "I Want To Give You A Baby" for a compilation LP that Manfred Schiek was putting together for Atonal Records. We wanted Simon and Steve Tanza to assist but Simon gave a firm "no". They were owed monies from Manfred for recordings they made of other bands for him, and they had to make a firm stance. I wonder if this LP has anything to do with it?

The LP needs a CD re-issue.