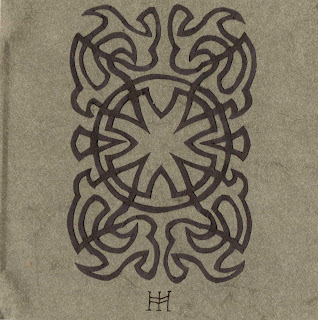 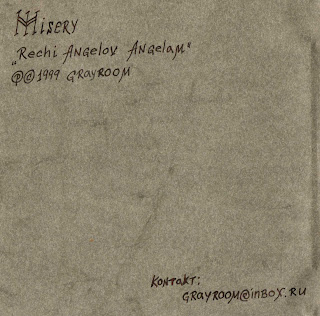 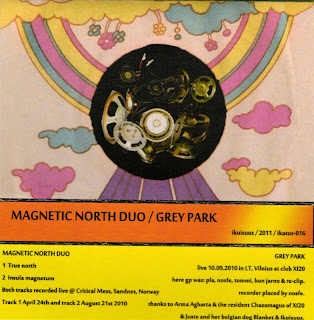 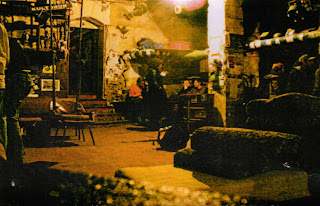 I was pulling out the Minny Pops CD "Secret Story" on LTM to play at work and out came the CDr "Rechi Angelov Angelam" by Misery as well. It is packaged in a very slimline case and my CD's are shelved pretty tight together at the moment. Space issues. I took the CDr to work.
I have had the Misery album for eleven years and today was only its third or fourth play. I remember Steve Fricker recommending it on his Cheeses International list so I bought a copy.
Misery is the solo project of Russian musician Andrey Ivanov. I am uncertain whereabouts in Russia he is based, but guesses are it'll be Moscow.
"Rechi" is a five track album, all tracks being untitled and lasts just under an hour. (I think, as track 4 stuck and just carried on looping, and it took me a moment or two to notice). The first track is a 15 minute opus of noise, synthesizer through effects onslaught. Very good, but sounding very "1990's". Think M:S:B:R "Harsh Works" or Merzbow at his Batztouti stage. Like I said, good stuff. It plays like a live recording and does "phase" a little. It's like, if it was on a cassette I would be thinking that the tape heads need a good clean. The sound owes more to Japnoise than European Power Electronics. Good stuff. Track 2 is minimal by comparison. Minimal and industrial with its sparse synth and mumbled voice. "Silent Schrei" or "Science Scree" the voice seems to be saying. (If anyone out there wants either of those titles for an album or band name...you're welcome). It plays like an out-take from S.P.K.'s "Information Overload Unit" LP. Good Stuff. Track 3 has a rhythm machine. The last three tracks have rhythm machines on them, with the volume turned up to the red. The last three tracks sound like improvised studio recordings - unedited, and not so good stuff, and like I mentioned track 4 stuck in a loop-groove. I see (where would we be without the internet) that Andrey and Misery are still very active and I am keen to hear his present day stuff, see how he has progressed his sound, as for "Rechi"...I think it was stupidly limited at the time. 50 copies or suchlike. It's not even listed on Discogs.
Staying in the Baltic region. Also this week came the split tape release by Magnetic North Duo and Grey Park on the Finnish label Ikuisuus. (That means Eternity in English...I've been boning up on my Suomi y'know). Packaged in a beautiful full colour glossy card sleeve and all for 4 Euro. How do these Finns sell there wares so cheaply?
This time last year I was discovering the Norwegian musician Andreas Brandal, this year I am hearing fellow Nords Magnetic North Duo for the first time. I was expecting some sort of "Kosmische" drone, psychedelic tape sleeve and everything, but what we have on this cassette are two live tracks of improvised musique-concret. Itchy and Scratchy. There's a guitar and bass in there with their strings being scraped, plucked and vibrated all with a fair amount of contact mic' kerfuffle. Often a groove appears but it disappears into the space and silence. The tracks were recorded live in Norway. I have very little of this style of music. When played and experienced live I find it thrilling but on cassette/vinyl/CD it takes a genius to make it work. I hold up Mark Durgan & Spoils And Relics as exhibit "A" M'lud. The recordings are crystal clear unlike Side B and the recording of Grey Park live in Vilnius, Lithuania.
I have declared my passion for Grey Park elsewhere on this site. They release essential stuff, not all of it is 100% but all of it deserves a listen. Here we have a 20 odd minute live assault recorded on what sounds like a mono "Realistic" tape machine placed at the back of the venue on a table that others are using for drinking. Not a mixing desk quality. The side begins with a gruff Teutonic voice shouting "Beer! Beer!". The live sound is untitled and GP get straight in with a multi layered wall of sound, swirling and building before collapsing into a quiet piece that could have tape loops of "found voices" or it's the folks around the tape recorder discussing the next days events. The whorle of sound picks up again before it ends - all too soon. The quality of the recording does not detract from quality of the sound produced. Instant classic in the GP arsenal. The recorder is left on for about 5 minutes after the gig and ends on an unearthly garbled sound. Worth keeping the tape rolling for.
Ikuisuus is a new label on me, and this is catalogued number 16. Hopefully I can track down a record shop in Helsinki that sells some of their releases when I'm over there in a few weeks.