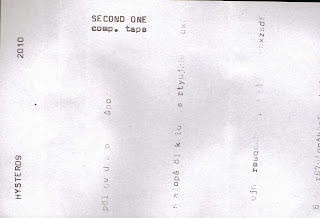 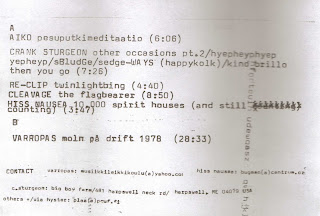 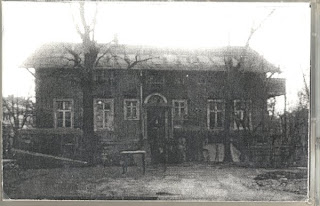 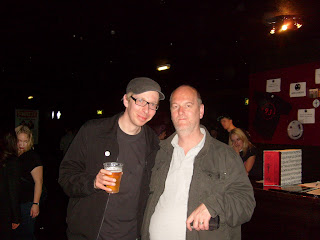 There I was playing the Duncan Harrison side of the recent tape split with Hobo Sonn thinking about the use of recycled tapes and through the letterbox pops the cassette "Second One" from Hyster Tapes. Hyster Tapes being the crack Finnish label that releases on 100% recycled cassettes. "Second One" is their second compilation release, their first "Your Own Shadow Blocks The Light" was released four years ago (and features a rather excellent track by Culver).
"Second One" is a very mellow cassette, tracks made of low drones and shuffling electronics. I must admit to not hearing of a few of the artists on this compilation, starting off with Aiko. They are Finnish, as are Cleavage and Re-Clip. Chances are that these are all side projects from members of Grey Park - I am not saying that they are, just that chances are. Hyster Tapes is operated by plaa of Grey Park. Side One plays like one long piece, or at least pieces from the same band. To me that is the sign of a well constructed compilation. Even Crank Sturgeon (who I have always thought of as America's answer to Smell & Quim) provides a "nice" track of tape manipulations and lo-fi noise. Side Two is that strange beast on a compilation; a side long track (by Varropas). Twenty eight and a half minutes of a repetitive guitar (4 note pattern) interrupted by various synth noodles, electronic interference and tape varispeeds. After a few minutes it becomes all very dreamy and blurred. Good stuff and I want to hear more from this project. For some reason it put me in mind of another Finnish project called Hinageshi Bondage. They were damn good but went off the radar about 10 years ago. I wonder if (t)he(y) are anything to do with Varropas?
Hyster Tapes always provide the goods and their releases will set you back 2 Euros a piece. That's right. 2 Euro a tape! What is your excuse? Go to www.pcuf.fi/~plaa/hyster.html now!
Each tape is limited to about 100 copies, which means Hyster02 "Doin' It Dresden Style" by Dieter Muh is now all sold.....
I have come across a Russian site that had the bloody audacity to put Hyster Tapes up for free download, when an actual release will set you back 2 Euro - that is a bloody disgrace.