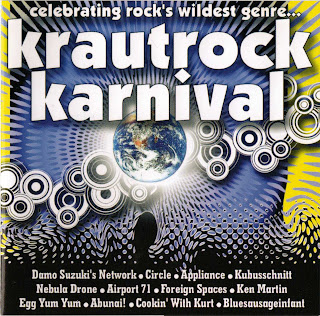 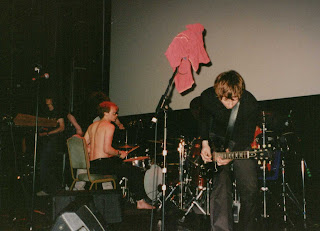 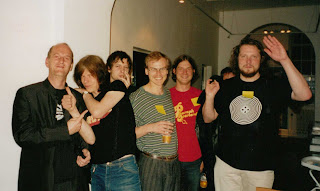 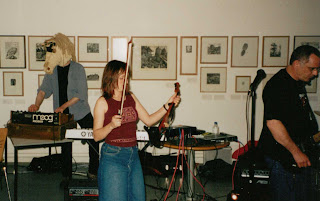 I do like compilation albums. I am a big fan of the comp. Last year I appeared on 4 compilations. Starting the year with "Stahlerne Lichter" CD on Licht Und Stahl and finishing with a track on the accompanying CD to "Encyclopedia Of Industrial Music:Volume 2". I am at this very moment finishing off recording a track for a future compilation CD with two other compilation projects to finish before the end of April. (I am not counting the track required by the Lithuanian "Terror" Magazine as I haven't heard from them since last November). Dieter Muh would have appeared on more compilations in the 1990's if it wasn't for the fact that Dave wasn't keen on them. I used to say "Nurse With Wound early 1980's; they were on every compilation tape going...and it did them no harm". But no (as Colin Newman once said).
When a compilation works well it is a beautiful thing, either as sampler for a venue, city, label etc or a movement or genre. A top ten of favourite compilation albums would be interesting. (I like lists)! "Front Row Festival", "Business Unusual", "Hicks From The Sticks", "Wolfsangel" bloody classics. Recently "Ambient Intimacy Volume 1" CD on EE Tapes became a benchmark for the compilation. Adeptsound's "Bacterium" CD from last year was probably one of the best compilation projects of 2010.
Certainly not in my top ten, but I dug it out for a play anyway, is the compilation CD "Krautrock Karnival" released by the Saint David's Ambient Society/Future Sound Of Exeter label in June 2002. In the summer of 2002 I went along to the CD launch party at The Phoenix Centre in Exeter and came home with a copy. What surprised me with this 12 track compilation is the lack of bands from Exeter (and/or surrounding area) on it. The Future Sound Of Exeter does not come from Exeter (and/or surrounding area).
The CD kicks off with Finnish masters Circle. By 2002 their star was in its' ascendancy, and with the CD theme being Krautrock they supply a masterful slice of the genre called "Dedafiktion". This is Finnish psychedelia clashing with the sound of Amon Duul and Neu! It's a great start. I like Circle, I have a few CD's and 7"'s and I don't play them enough! (Unknowns) Airport '71 follow with some bland space-rock followed by Appliance in "lounge musik" mode and the track "Derailleur, King Of The Mountains". Appliance are the first siting of a band from Exeter. Basildon based Ken Martin follows with some Tangerine Dream homage. Kraut in essence but not much rock. The German group Foreign Spaces give us the melancholic "Phoeton 3-Utopia". This plays like really bad film music. A bad Tony Scott film with a Pete Bardens inspired soundtrack or something. With some faux military snare in the mix it should be called "Pablo's Theme" or some such. Bloody poor. Kubusschnitt bring the whole thing back to Tangerine Dream before Cookin' With Kurt (yep' the band is called Cookin' With Kurt) supply some really bad flute/drum/bass/ washy synth piece. The project is moving far from Krautrock now and going into the area of "Hippy Music" a la Ozric Fucking Tentacles. I have an LP by Here And Now, I am not adverse, but this free-form sub Tull (and dreads) is awful...but not as bad as the next track by Damo Suzuki's Network. A fifth rate Last Poets piece. I would have though that anything after this track would be a worthwhile listen but Bluesausageinfant disappoint with a track of bland. Next up is Exeter based Egg Yum Yum with a heavy Post-Punk piece called "Ooh-Sky-Rah-Ket". Egg Yum Yum are using Can as an influence here with heavy drums and a floating violin sound. Excellent track and along with Appliance and Circle following the "Krautrock" theme. The CD finishes with Abunai! who have a bloody annoying drummer and Nebula Drone who make New-Age washing-up music.
All in all a poor compilation. The future sound of Exeter does not (obviously) come from Exeter but is hired in to teach the Exetonians a lesson! Or, as it turned out the future sound of Exeter is Will Young and Muse (from Teignmouth but lived in Exeter before hitting the cocaine world of big time) and neither of them are on this CD.
On the 7th of June 2002 The Future Sound Of Exeter held a CD launch party at the Phoenix Centre in Exeter with Circle headlining. Excellent gig. Egg Yum Yum played an absolute blinding set in an adjoining art gallery and Appliance (although billed) never played.
What happened to the future sound of Exeter as an organisation I do not know. As for Saint David's Ambient Society.....I think they're still going......