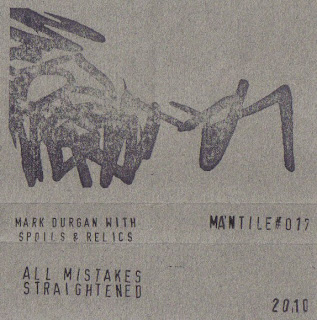 After witnessing the live performance of Mark Durgan with Spoils & Relics at the Lowest Form Of Music Weekend last month in London I was all questions to whether or not the set had been recorded for future release, then somebody commented that the set was better than the cassette release on Mantile. What! How did that one slip through the radar?
I managed to get in touch with Mantile MD and future sound of Plaistow Johnny Scarr through the My Space site....but it took a while...should have gone straight to the "official" Mantile site. Doh, the glory of hindsight. The cassette was with me within days. Great service,
So, is it better than the live set in London? The live set in London came straight out of leftfield. It was loud, bloody loud as sounds came out of the speakers arched around the ceiling, brought their own silence and hung there waiting to be used. Scratching sounds, irritant sounds, tense sounds. It was not worth watching the performance (they played in front of the stage and were virtually invisible) to see how these sounds/noises were created, that would have been too much of a distraction. I stood rooted at the back staring at the ceiling.
So, is it better? No. But it is a nice companion - played as memory.
I am not at all au fait with this genre of sound. Musique Concret. School of Stockhausen etc. I did see Alvin Lucier live in Exeter a few years back (strangely enough with Mark Durgan) and that too was simply amazing. I have Mark Durgan solo releases, but they don't sound like this. I have a Spoils & Relics split LP (on Harbinger Sound) but it had an empty feel....together they make a beautiful noise. Closest comparison ("music" wise)? Das Synthetische Mischgewebe on side A. Side B (there are no track titles) brought to mind 1970's Smegma and The Residents...there was something more cognitive about it all.
Johnny put in an extra Spoils & Relics cassette, saving that for the weekend.
£6.00 in the UK. Bargain. BUY!