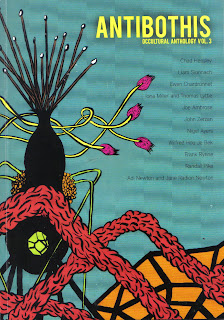 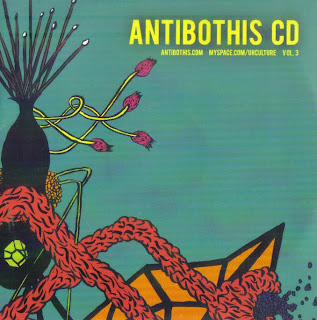 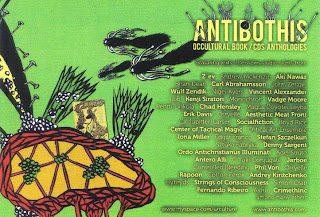 95% of what I read is "music" based whether it be autobiogs, biogs, critiques, genre based books (like Alex Ogg's "No More Heroes" or Ian Glasper's "The Day The Country Died") or simple information like the "Discography Of The New Wave" by B. George. Then there's the magazines, fanzines and small tracts. What makes up the other 5%? Well, there's always the "Radio Times" (weekly listings mag for those non UK readers) and recently some Lon Milo DuQuette, the Nocturnal Emissions "Network News" anthology and an Alan Davis (auto) biography of sorts. It was the mention of Nigel Ayers that drew my attention to "Antibothis:Occultural Anthology Volume 3" writings selected by Fernando Cerqueira.
"Antibothis" (No idea what it means) is a 138 page A5 paperback book with a memory of "Apocalypse Culture" or "Rapid Eye" books of old, but carrying more humour in the pages than any of those two publications, and a compilation CD.
Fascinating from page 1, and quite unputdownable from page 6! Chad Hensley writes about necrophiliacs in the piece "Dead Lays". The confessions of those who sleep with and fuck the dead, the ones who like to cuddle up with cold bodies, the ones who like a warm dead orifice to fuck. In America there are only a handful of States that treats necrophilia as an offence, in other Sates it is classed as "breaking and entering". Ewen Chardronnet writes about the use of drugs in warfare throughout the ages. Iona Miller has a great piece on Dr. Alexander Shuigin, the father of MDMA and his role in the Illuminati. Conspiracy theory abounds. John Zerzan on "Silence". Nigel Ayers piece "All Killer, No Filler" is random writing. Googling words at random and documenting what comes up. Reads like 21st Century cut-ups. Frank Rynne writes about his time with The Master Musicians Of Joujouka and the troubles with the opposing Musicians Of Joujouka that is operated by the Paul Bowles estate. (You see there was Mud, then there was Les Gray's Mud). The book finishes with writings by Adi + Jane Newton for TAGc.

The CD is very entertaining, containing stuff I would not (as a rule) usually listen to. Lydia Lunch & Phillipe Petit, Checkpoint 303, The Master Musicians Of Joujouka, Kal Cahoone and Orbit Service to name but 5 out of 12. There is a track called "The Denizens" by The Anti Group, I am uncertain whether or not this is a new + "exclusive" piece, but certainly one for the Adi Newton collectors. The CD (overall) has a feel of one of those compilations that come free with "The Wire" magazine. Good in parts but pants in others.

The magazine comes from Portugal and cost me fifteen euro (inc P+P to the UK), and I feel I have a treasurous bargain.
Well recommended.