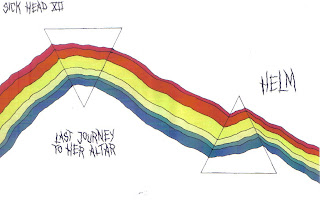 Have just spent a pleasant week listening to Helm's 2007 cassette "Last Journey To Her Altar" on the Scottish Sick Head Tapes label. That's right, I said a week. Time at work now allows me to take in my own music (I don't mean Dieter Muh, but yes...some has been played) and blast it out and varying volume. This week I have been mainly listening to...The Pop Group, Nocturnal Emissions, Neu, Faust, Blood Axis, Borbounese Qualk, The Door And The Window and Bauhaus but always a daily play of Helm.
I recently got the Helm album "Optimism" (Trans-Dimensional Sushi Recordings 2007) and was not that taken with it, a shame after the vinyl LP "To An End". After hearing that I was desperate to get my hands and ears on the works of Luke Younger - I bought the split 7" with Family Battle Snake (Luke in his Birds Of Delay outfit) on Tome Records but that fell short of a decent listen/experience. (Problems with pressing)? So...I bought "Last Journey To Her Altar" as a kind of litmus test...if I thought it pants, then I shall leave Helm alone and wallow in one classic LP.
No need.
"Last Journey To Her Altar" is a C40. Two 20 minute journeys. Instrumention is hard to fathom. Side A brought the phrase: Keyboards assemble themselves at dawn to mind. Think TG's "Industrial Introduction" or "Damaru Sunrise" and we are along the right lines. Side A is very much an awakening, start of the journey, it builds in to this steady drone and leads us in to Side B. Whereas Side A has a begining, side B continues to build into this all consuming drone. A journey, again, what is actually being played is hard to fathom. Keyboards, synths, guitars? Sitting and listening whilst the autoclaves are burring and hissing and the distant traffic rushes along the Riviera Way this album is a beauty and has restored my "faith" in Helm/Luke Younger. When chance occurs I will buy more and encourage you to do the same.
Posted by Steve at 20:35