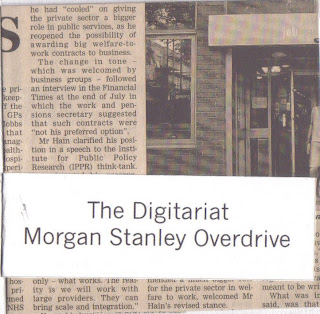 There is certainly something to be said for time and place, or finding a sound to suit the surroundings. The Digitariat's album "Morgan Stanley Overdrive" on Luggage Records (Lug014) was something that arrived early summer (with some other fine Luggage Records stuff). I put it in the disc player and gave it a minute or two before filing it away in the box of CD's marked "A-N". (Yes I have a big box marked "A-N").

Now I have a new job. A new post within the hospital. I have my own room, a room where I am master of my surround. Good stuff. I have taken down all the previous owners collection of paper cuttings from the tabloids and dusted down the shelving and disposed of the crappy little radio that could only receive PALM FM and replaced it with a seriously loud portable CD/Cassette player. I work in the bowels of the hospital dealing with pathological samples, and strange substances...nobody likes to come near where I work because of the odour, which to me smells like over boiled magic mushrooms. A fine repellent.
So now I can take stuff to work and listen to it. The pile is ever growing (not a bad thing) and seeing that there's a Hunting Lodge triple album box set and a Pyramids five cassette box set thingy loitering in there, having the extra time now at work to play stuff is crucial. A few days ago I received the Dachise 7" "Sugar Path" on Tochnit Aleph...yet to spin, but I remember it from the time I shared a house with Mick McDaid and really liked it, then I met Paul D. (Dachise + The Digitariat protagonist last but one weekend ago) and I thought I would give The Digitariat album another go....so I took it work.

The Digitariat "Morgan Stanley Overdrive". 2010, Luggage Records. (Lug014). Completely black CDr, black is beautiful. I had to google who or what Morgan Stanley is. Turns out to be a global finance company. Hence the opening title "Credit & Debt". An opening salvo, a short sharp introduction. "Intimacy Problems" is the main piece of the album. Hard to describe. Chip & Pin (?). Electronic mischief, abstract composition. Noises, electronic noises gurgle, whistle and wheeze sometimes fart their way in and out of a tonal blanket...a monotone Casio note is ever present but hiding in there. This could be the work of a Scandinavian student of Stockhausen, some high art construct. To me (as I sat attentive listening whilst messing with tubs of Formalin) it was ideal, an ideal sound to work to. Prurients' "Cocaine Death" (the previous play) was too "angry".
I'm looking forward to hearing more The Digitariat, although I shall tread carefully as I remember the 2001 CDEP "I Created Over One Million New Jobs" on The Locus Of Assemblage being a poor slab of gabba junk.
Visit www.luggagerecords.co.uk there may be copies still available.

Picture.
1: Sleeve of The Digitariat CDr "Morgan Stanley Overdrive".
Posted by Steve at 20:39