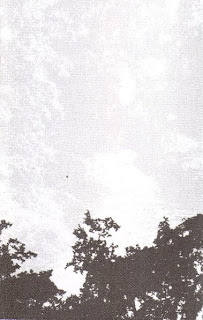 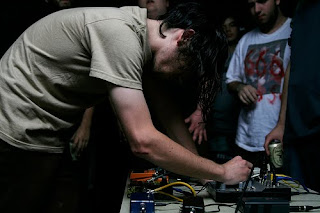 Had a couple of Emaciator tapes arrive today. Both from Los Angeles; packaged in one of those beautiful camel brown / golden sandy brown envelopes that the Americans have been posting lovely cassettes to me for years. Los Angeles to Torquay.
I was spurred on (intrigued) by a review of the Emaciator "Possessive" C30 tape on Hanson that appeared on the Dead Formats blogspot that I tried to find out more. First port of call is always Discogs (forget MySpace and Wikipedia) and there I saw a fine catalogue and tapes for sale. I went for the "Possessive" tape and "Merit"; a C15 tape released by New York based label Arbor back in 2007. The guy in L.A. was selling for mere pence at today's exchange rate. UK folk take note.
If I had not of read the Dead Formats review and just seen a tape on a table at a gig or in a shop like Second Layer I probably would not have given the name the time of day, it has that cheap U.S. noise type of sound to it, but I am always willing to learn. Emaciator is the project of Jonathan Borges, an American musician of many varied instruments and styles. Discogs lists a slew of projects he is or has been involved in but I put my hands up when I say I've heard of none of them. His description of Emaciator is Scum + Prog Rock!
"Merit" is a C15. Seven-A-Side. I love C15's. I used to buy them all the time in the 1980's. 1985, when I lived in Sheffield, there was a computer shop that opened selling Sinclair CX's and C15's. I bought by the bulk. Ideal for doing samples. The first release by The Streetcleaner on Carnifex Recordings was a C15. "Merit" is a C15 and therefore took priority. The sound of Emaciator has totally thrown me. Not What I Expected (great Crispy Ambulance song) at all. Side A: "Rue, For Widow" is multi-layered guitar chords through a variety of effects. I hear violins, I hear heavy keyboards, I hear voices crying in the aural fog all hidden in the curtain of guitar noise. For seven minutes I was taken in and lost. Great stuff (play loud). Side B: "Resilient Shadow" is a continuous Harmonia drone. Like the first second of a track by Nico or (what came in to my head) Ivor Cutler. Lovely. The playing took me back to when I first heard Boyd Rice and/or Lustmord and immediately I got into the layers of sound and the noises that were there swirling around and hiding within. A very personal sound as the person sat next you may or may not be hearing the same thing.
I've yet to play "Possessive", but I'm going to try and hunt down more Emaciator. Vinyl would be nice.