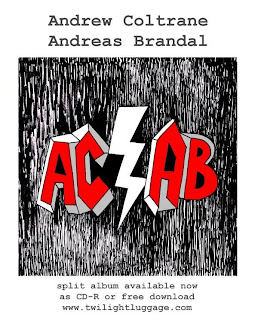 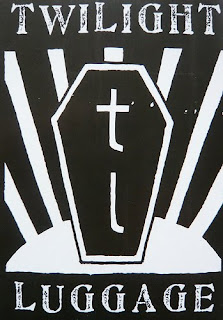 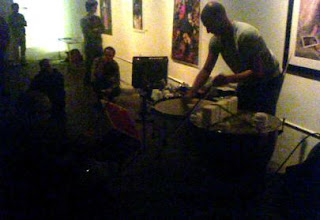 After hearing the slightly disappointing Andreas Brandal album "A History Of Labyrinths" on Basses Frequences I thought to myself, right no more Brandal purchases this year..coffers to go elsewhere. Then I saw this album advertised on the Troniks forum board for only a fiver (£5) and I was in....Also I was intrigued to hear what Andrew Coltrane sounded like.
The album is called "AC/AB" (by Andrew Coltrane & Andreas Brandal). Released as a CDr on the Norwegian Twilight Luggage label. One thing that I did not know is that Twilight Luggage is Andreas's own label. The album has one of the worst sleeves in my collection, probably dislodging Ashtray Navigation's "Four Raga Moods" off the top! Information is slim on the cover, but the artist remains anonymous.
Andrew Coltrane supplies 35 minutes of muddy waters processed through a bank of effects. This may (or may not) be a sub-divisional genre of noise called HNW. HNW gets mentioned a lot on noise forums and is usually associated with folk I have never heard. Andrew Coltrane may be one of those names. I also have no idea what HNW stands for. Harsh Noise Workout? Heavy Noise Walls? Anyway. Playing the two untitled pieces by Coltrane loud I was taken back to the Sterile sound of Lustmord and MB and the Physical Evidence of Non. Real bass rumble noise with a lot going on under the vibrations. The second piece ends with the sound of a VL Casiotone rhythm box revealing what (through a bank of effects) was making the pulse. Good stuff. Andreas Brandal supplies 24 minutes split in to three pieces. The first two are of low key noise, quietly amplified metal scrapings, prepared guitar scratchings and tonal piano. The pace and noise picks up in the last piece taking some insect like scratching to the edge of hearing with an all surrounding ampnoise filling in the gaps.
A good pairing and an impressive release. Just a shame about the sleeve.
The CDr is available from Twilight Luggage - it is also free from them as a download but please buy a copy as all proceeds go to Andrew Coltrane's partner to help her with her medical bills...she has to have a brain tumor removed.
Worthy cause - excellent album.