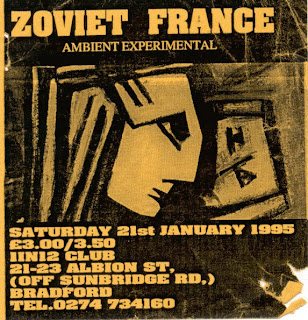 It was whilst watching the video clip of Preslav Literary School I remembered a gig of 15 years back. Soviet France at the 1in12 Club, Bradford. What put me in mind was the array of cassettes on the table. Soviet France (To me they are called Soviet France ... not Zoviet*France, they are filed under "S") on this particular evening was just Ben Ponton. Down from a three-piece to a solo performer - I now know how he felt. Anyway. I was lucky enough to witness Ben set up and prepare for the live performance as Dieter Muh were support, it was our third live performance. I had seen Soviet France play live before and had written to Ben on various occasions throughout the 1980's so it was quite easy to casually chat whilst Ben set up his equipment. An eight channel mixing desk, a small keyboard sampler and an array of tape machines with a box of cassettes - all the cassettes were of previous Soviet France live performances. One cassette caught my eye: "Soviet France - Live In Whitley Bay". I so desperately want to hear that tape! Here is a group that have performed all over the world...and Whitley Bay. I love that idea and one of the reasons why I like the gig in Cleckheaton being on the Dieter Muh live performance list. By the way, if anyone has a copy (cassette or CDr) of Soviet France at Whitley Bay I am very interested to own.
I like the idea of playing past performances on tape and mixing them in to a new performance, Ben certainly "played a blinder" that night. It was a night that apart from an excellent set from Soviet France I remember very little about, I know I played pool against Dave Gedge and Mike Dando complimented me on the set....we even sold T-Shirts that night to two guys from Boston USA (not Lincs). It was a great night out of much drinking and merriment and non of us signed autographs...OK!!!!