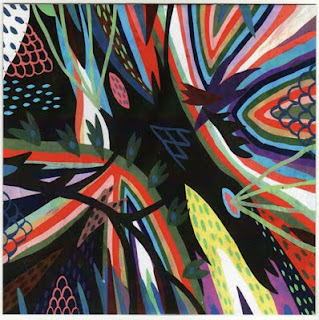 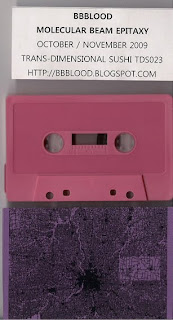 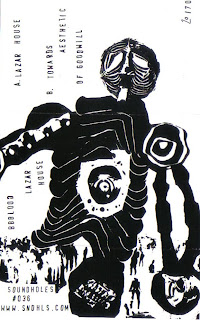 Just spent a pleasant while listening to BBBlood. After last months mention Paul was kind enough to mail me a package of BBBlood and stuff from his Trans Dimensional Sushi label. Cracking stuff and after a while playing some slightly disappointing stuff I have got recently by Leif Elggren and Mothers Of The Third Reich, BBBlood (and Helm) played like a breath of fresh air. First on was the 2009 C30 release "Molecular Beam Epitaxy" (Epitaxy; the process of growing crystals on other crystals...I do do research). This tape was recorded in October/November 2009 and rather like the previous tape I have on Beartown Records sounds very similar to Putrefier. No bad thing. Two slabs of electronic chicanery both emanating from one source and taking separate journeys. Side 1 seems to start with a treated vocal clip whilst side 2 is from an orchestral sample. (To these ears anyway). The next tape I played was released by Sound Holes. I've got a Nackt Insecten + Abyss Whispers split CDr on Sound Holes that is excellent, this is only my second release on the label but I am going to have to discover more! BBBlood sound here is less urgent, more sonambulistic in approach and style. Again, it's a C30 which seems to be a perfect time length for Paul's work - although whilst typing this I am spinning (and bloody enjoying) the full CDr release "Experiment 50".
Google Trans Dimensional Sushi or BBBlood or discover them both on Discogs. Listen, support, enjoy...it is bloody good stuff.