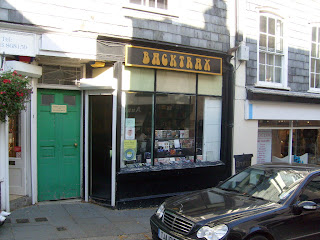 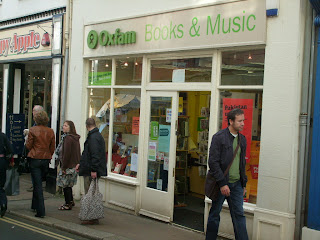 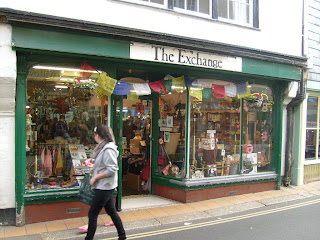 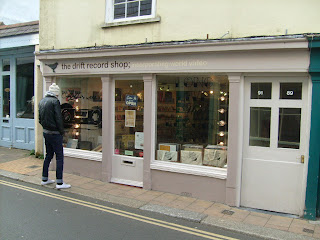 Totnes has been mentioned before on this site (February 2010), but this time I thought I'd mention the vinyl pickings to be had there.
Totnes is home to four record shops - yes that's right FOUR! Problem being all four shops don't stock anything released after 1976. OK, a little harsh but close to the truth. Totnes is a hippy haven, old men dressed like they were still in 1967 with grey-haired ponytails and rotten teeth. Jimi Hendrix, Janis Joplin, Carlos D. Santana are all heroes to the folk of Totnes....The other day I was walking past a newsagents here in Torquay and they had a copy of "Mojo" magazine in the window, which had a picture of Jim Morrisson on the cover. "Mojo" always has a picture of Jimbo on the cover - if it's not Jimbo then it's Roger Daltrey or Jimmy Page or Jimi Hendrix or Rod Stewart in his "mod" phase. So, I thought (whilst passing) how the hell does this magazine sell when it just prints the same old guff about the same old fossils..."Unheard Joplin Tapes found in studio"....Reason to stick the dead dog on the cover and re-tell the story that has been told since 1970whatever...Who buys this magazine? Folk who still buy all the CD reissues of albums made in the 1960's / 1970's I guess. Folk who live in towns like Totnes.
Totnes is one street of shops, Fore Street...there is Ticklemore Street that has a cheese shop and a Balti House, but if you're visiting Totnes then you'll just be shopping on the one street...Fore Street. If you start at the bottom the first vinyl / CD / DVD shop you'll see is "Backtrax". I know, awful bloody name. Step into a seventies time warp and gaze at shitty LP sleeves whilst listening to Bob Dylan or Pink Floyd here....next stop "Oxfam". This is one of those "Books + Vinyl Oxfams". This is a shop where you might just see records released post '76. On my last visit I bought a John Cooper Clarke LP for a tenner - this visit there was nought. They did have a copy of The Mob's "No Doves Fly Here" 7" for £12.99...yes £13 for a 7" in a charity shop. The whole shop has that "I saw you coming" feel about it. (Over the road there's an "Animals In Distress" Charity Shop with a Wire "Peel Session" 12"EP selling for £7.50. ("We were going to ask for thirty bob but...I saw you coming").
At the top of Fore Street and around the bend is "The Exchange". To be fair not strictly a vinyl / CD shop as it sells books, musical instruments, hippy paraphenalia and tie die skirts. There's a few boxes of vinyl, but again nothing after 1976. ELO or Jethro Tull fans could need a change of underpants whilst browsing. Over the road is "Drift Record Shop". NEW vinyl. World Music and shit. For Wire readers only. Drift past.