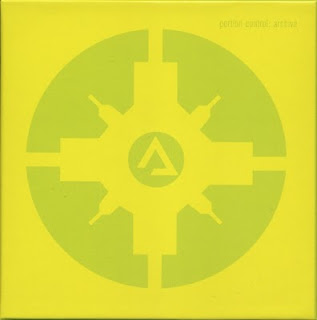 Yesterday, I dug out some old Portion Control to listen to. I have not played Portion Control in years...well, probably 3 or 4 years since the last thing I bought was the "Archive" 4CD Box Set/Badge Set on the PortionControl.net label. I plumped for the "Step Forward" LP. The sound took me back to the mid 1980's. The album has aged well, and had me dancing and Oscar waving his toy sword about on the landing.

I remember hearing Portion Control back in the early 1980's. Dan Plunkett of ND Magazine mailed me a copy of their "Gaining Momentum" cassette, and it was interesting synth noodling. It was around this time that Nocturnal Emissions, Bourbonese Qualk, Soviet France etc were coming into my orbit and SPK were coming out with their "Metal Field" / "Sandstorm Method" material.
A couple of years later I got the mini LP "Hit The Pulse" and I became hooked on Portion Control. They had almost re-invented their sound and introduced "hard electronic rhythms". Vocals - hard shouting sloganeering and abstract sentences mixing with crossing sequencer patterns that danced around the "hard electronic rhythms". An out of the blue album with a never heard of before sound. EBM / Gothic music as a genre was not invented back then, this was still Industrial. Industrial and hard, it was as confrontational as Whitehouse. Back then I could imagine Portion Control + Whitehouse sharing the bill at some subterranean dive in the Capital - instead I saw them support Blancmange at Manchester Apollo.
I travelled the UK to watch Portion Control live. Volume was everything. The first time was at a venue called "Diorama" near Euston Station in London. This was (I think) 1984. Illuminated Records evening. The last time was about 2 years later at Sheffield Leadmill (I still have the A0 Poster), by this time they had released the bloody awful "Psycho Bod Saves The World" LP on Dead Man's Curve. A very sad night and I don't think they continued much after.
I was surprised when I heard they had reformed. But a lot has happened in the world of electronic music in twenty years and now their hard electronic rhythms aren't as essential. I have not bought any of their new releases, I'll stick to the "Archive" Box Set. I trawled around You Tube and looked at their new stuff, and they looked like secondhand car dealers with Dean (vocals) shouting out his words like he was on his forecourt in Croydon.