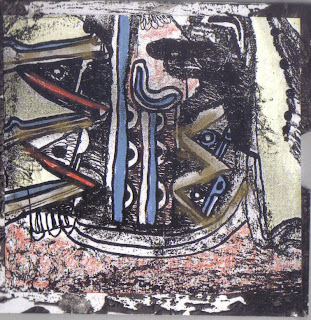 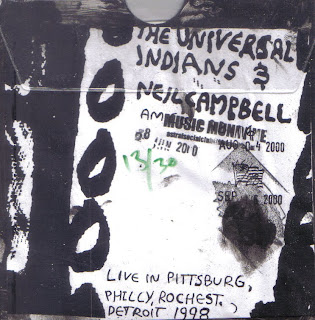 Just spent a pleasant while listening to a new release from the Music Mundane label: The Universal Indians and Neil Campbell "Live". The Universal Indians are a new one on me but now I know that they are the trio of John Olson (Wolf Eyes), Aaron Dilloway and Gretchen Gonzales (aka Mrs. Olson). They formed in the early 1990's, but this CDr documents their live appearances in 1998 with Neil Campbell.
The album itself is a re-release of a CDr that American Tapes put out in 2000. (Limited to 22 Copies). I was told that the sound was "typical American Tapes stuff" but seeing that I have never heard any American Tapes releases I was intrigued.
2 tracks recorded live in a variety of venues across the East of America, the sound is of improvised noise, jazz scrag and hooks. There's tape manipulations, sax blurts and cymbal crescendo littered about guitar walls and tonal wails. At parts I was reminded of Smegma and that "Clitordis" tape that G.R.O.S.S. put out a few years back. (or the LAFMS stuff that seems to becoming popular again). Much more of an uneasy listen than the Iibiis Rooge LP and CDr that came with this package - but limited to 30 copies it is a Campbell gem. Find and enjoy.
Posted by Steve at 21:55