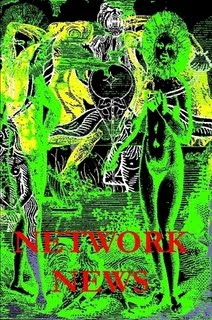 This is the second time I have bought from the publishers, Lulu, and I have nought but praise for their service. I can sit here of a Monday night and order a book that by Wednesday teatime I can be sat reading. Excellent.
Nigel Ayers (of Nocturnal Emissions) has collated his magazine from the 1990's into one wonderful compendium. "Network News" passed me by in the 1990's but then again...most things did. In the early 1980's I was familiar with the "Tracts" that Nocturnal Emissions used to periodically put out; they were like the old SPK "Dokuments" and the Recloose Org catalogues, but like I say - "Network News" is a new one on me.
Once from squatland in Brixton, by the 1990's Nigel and the Emissions had moved to the North-East of England, in the early 1990's Newcastle and surround was quite a hot bed of activity with the likes of The New Blockaders, Soviet France, Interchange Magazine and NE. There used to be regular live events and the "famous" Earshot festival. The first editions of "Network News" are like a music fanzine, with record reviews and interviews with the likes of Soviet France, Muslimgauze, John Watermann and of course Nigel Ayers. It is interesting stuff. Of its' time certainly, but interesting stuff. I still like flicking through old copies of "Flowmotion" and "Industrial News" now and again whilst spinning the oldies and if you're like me then this book is for you!
A few issues down the line and Nigel has upped and left the North East for the deep South: Cornwall. There is less emphasis on music and more emphasis on Nigel as an artist. The record (and by now CD) reviews get thinner and mentions of other peoples work goes from review to lists. There is some story/narrative running through the first "Cornwall" issues, but I couldn't quite follow it! What there is though are writings on psychogeography, astrology and (my favourite) the cult of Princess Diana. Fascinating stuff. Interspersed with newspaper cuttings That put me in mind of The Framley Examiner!
The last few issues read like a stream of conscious narrative. A story of one persons' life in the sub-culture.
Recommended.
Posted by Steve at 14:26