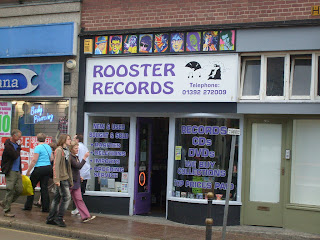 When I first moved down here to Devon in 2001 I reported back to my friends in the North that this place was a vinyl graveyard. I first moved to Exeter (for six months), and visited places like Truro, Bristol, Barnstaple, Brixham and Torquay and they were littered with great secondhand record shops. In Exeter there used to be Hens Teeth (near the Cavern Club), Central Records by Central Station, that musty old shop near the Pyramid Swimming Pool that was stuck in a 70's time warp and smelt of incense, There was a shop in the Fore Street Arcade that didn't have a name but a really friendly guy behind the counter who appeared on "Bullshit Detector Volume 1", there was a shop in the arcade opposite (the one that reminded me of the Mini-Market in Lincoln) and at the bottom of Fore Street there was some Amnesty / CND book and vinyl shop, all good stuff that made Exeter shopping fun. Now, alas over a period of ten years all these shops have closed. All of them.
There is however Rooster Records on the Fore Street (opposite Mad Megs Medieval Pub). There are two Rooster Records, one in Taunton and one in Exeter. The one here is well stocked with vinyl, huge Punk / New Wave section in both 7"'s and 12" LP's. They do stock new releases too, re-issue type albums by the likes of Chrome, Pere Ubu, Swell Maps, but they have enough secondhand stuff for a 30-40 minute browse, and a treat to find. Prices are reasonable, anywhere around £10 - £15 for a decent nick LP and £5 - £7 for a likewise single. (A couple of years ago I gave them 3 copies of the Dieter Muh 7"EP on Harbinger Sound, this was my follow up visit and I am happy to say that they have sold)! There is also an extensive CD collection. Maybe it is me, but flicking through the CD racks just isn't as interesting as flicking through vinyl. Although this visit "The Porlock Factor" CD by Glaxo Babies jumped out at me so I had to buy it. (£8).
If you have an hour and twenty quid to spare I recommend a visit.
Posted by Steve at 22:33