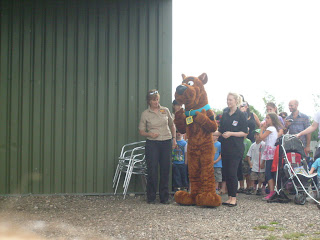 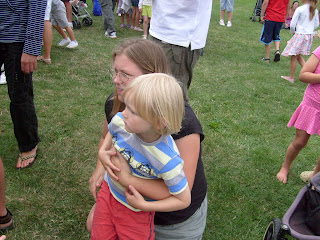 This is written as a warning to those with young kids.
Oscar Michael (aged 4) loves Scooby Doo. He has done for a year or so now. He is forever singing the theme tune. He has the Mystery Machine Van, the figures, the mug, the cartoon vids...the lot. He loves Scooby Doo. He even invented a quiz "What would Scooby Doo do if .... "? that he plays on long walks with Tamsin and I. He loves Scooby Doo. A few weeks ago he came back from Nursery clutching a flyer stating that Scooby Doo would be making a personal appearance at local Adventure Park - Crealy Adventure Park - at the end of July. Excitement abound.
The day came yesterday. We left our camp at Lustleigh and headed for Clyst St Mary to see Scooby Doo. On the way (a short trip up the A382/A38/M5 + we still managed to get lost) we all were wondering what would Scooby Doo do? It ws obviously going to be a man in a suit, but would there be Shaggy, Freddie and the girls? A mystery machine? Maybe a video backdrop with some interaction - a short play? All these possibilities were mentioned.
The PA announced that Scooby Doo would be onstage for ten minutes(!) in 3 minutes time and repeatedly played the Scooby Doo theme tune - which apart from a great second or two of pure moog before the drums come in does get on the nerves a little. We gathered around a shabbily constructed small plywood stage, 2 girls from the "Crealy Adventure Park Entertainments Team" came on stage to whip up the assembled throng in to a frenzy - it was pure 6th form college performing arts style and slightly embarrassing but never mind as the kids were a whooping and a hollering for Scooby. Then from around the corner this thing appeared staggering like a geriatric in a second rate Scooby Doo suit. Standing about 6 foot it was obvious that the person in the suit (who had lady bumps...on closer inspection) could not see a thing. Scooby then passed amongst the front row of kids attempting to "hi-5" but more often than not just clomping a kid on the side of the face and then quickly patting its (the kids) head. Scooby was helped up on the stage like an blind pensioner with Altzeihmer's where, with the two girls danced to Steps version of "Tragedy". (Quite fitting). Tamsin and I stared at each other mouth a gape in stunned disbelief. Scoob was then helped down off the stage and repeated the "hi-5ing" to little applause and Avril Lavigne (on tape) singing the Crealy Adventure Park Theme Song. The whole thing lasted 10 minutes.
We asked Oscar what he thought, and he said that it wasn't Scooby Doo, we pointed out that Scooby was a cartoon character and that he couldn't really appear in person and he just said that it was rubbish. If you can't fool a four year old then I think you're in trouble.
It cost the three of us £15 each!

We spent a few hours in the park, not very good unless you like queueing for second rate rides and want to see your kids get bullied by sink estate kids from other parts of the British Isles. (Not a patch on the amusement park in Toronto...but then again, I'm a snob)!!
I did think of writing to the creator of Scooby Doo or Hanna Barbera to let them know what utter trash is being peddled and presented in the name of their work, but then again I don't think they really care.
Next Wednesday it's Spongebob Squarepants...we won't be going.