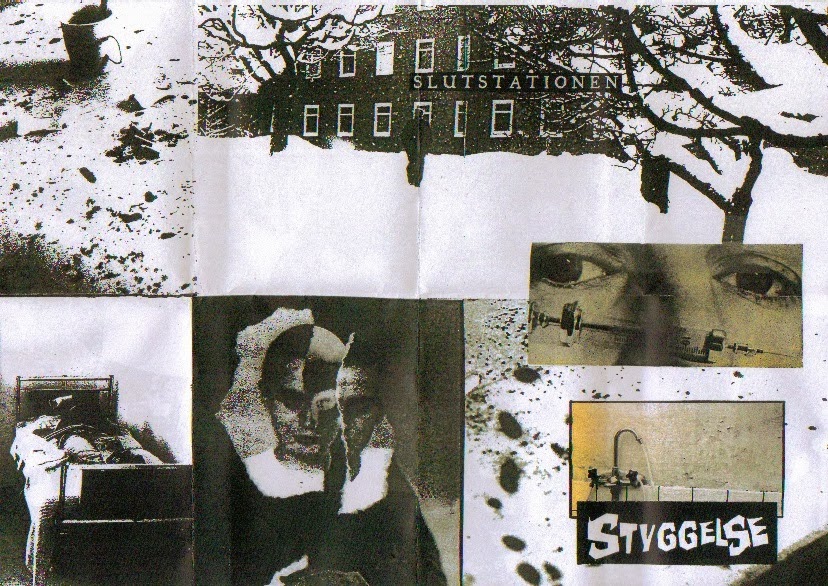 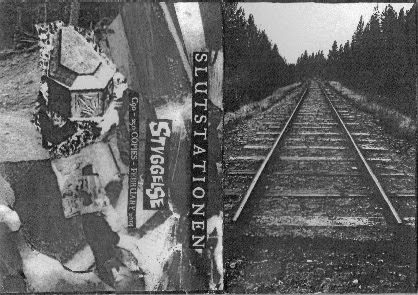 Have spent a pleasant while listening to the latest compilation cassette release from the fine Swedish label Styggelse : "Slutstationen" (Translates as "The Endstation" in English). "Slutstationen" is the final piece in a trilogy of compilations that began with "Piller Thriller" and followed by "Pundartugg-Argot Bruit".
Over the past couple of years the Swedes have been on the ball with their fine compilation releases, I am thinking of the "Tapeworks" series on Hästen & Korset as well as the "Venice Of The North" and "Nördostra Malmö" tapes … Also the "Stein" compilation on Verlautbarung Records and the "Sverige" vinyl album on the now defunct Release The Bats Records. A few names that appear on the aforementioned releases also appear on "Slutstationen".
The compilation starts with Vit Fana. Cold open synth a la John Carpenter - desolate landscape screen shot as opening credits roll. Explosions … and … cue action. Puce Mary. This album is my first exposure to Puce Mary, a name (to me) being banded about rather like Cremation Lily and Lust For Youth were a few months back and Lettera 22 before them, and I now know why - impressive sounds. A throbbing pulse with pummelled metal reliving "Leichenschrei", indecipherable distorted vocals build and scream. Brighter Death Now enter with "Enough". An excellent bass line and a classic slice of (unsurprisingly) old school Industrial Noise. I am not a fan of the description old school but I can't think of a better one to describe Brighter Death Now. Alfarmania follow. Alfarmania is now the solo project of Styggelse label boss Kristian Olsson with Tony Hallén leaving - maybe to concentrate on Erektus 2K? Alfarmania bring a live multi-layered wall of noise and chaos. A sonic vortex that sucks you in and spits you out in to Shift. Shift is the UK based project of Swedish exile Martin Wilford. "Wipe Them Out" is a brutal all out assault on the senses. A table of effect boxes, a noise source and the voice as an instrument. Classic Harsh Noise Wall. The sound drops in to Händer Som Värder. Veterans of the Swedish compilation with appearances on "Tapeworks" and "Venice Of the North". They present "Jag Blev Stout" which sounds like something Paul Watson would drink on a Saturday night but is a masterful piece of tape splicing / radio manipulations and contact mic'ery. Theta follow with "Scopaesthesia". A track that doesn't thrill or interest me. Arv & Miljö close side one with "Johnny". The sound of a mechanical wheel turning, a big sound. Looping sounds, abstract sounds pieces introduced to the pattern before disappearing and reappearing moments later. Arv & Miljö are big favourites here, an excellent track.
"Slutstationen" is a C90. Sometimes too long for a compilation, but listening to side one time just flew by. The sounds transfixed me.
Side two opens with Ochu. Ochu is former Segerhuvaite Love Rosenström. "Sopa" has a threatening low level vibration that builds in to a chaotic hum and battle scene. Like Vit Fana and their opening piece on side one, this piece is very visual. New name to me Negative Climax bring a hint of Club Moral to the proceedings. Repetitive vocals and lots of reverb. There is an attractive recorder / gourd sound in the mix giving the track an "Eastern" feel. Treriksröset are pure noise, noise from the Japanese school of noise electronics. "Tillägnad Gubb" is surprisingly slow, but far too long for my ears. Maniac Cop follow on similar lines with lo-fi looping and circuit bending. I know little about Maniac Cop…they may be from Gothenburg. Teufelsdöckh follow with a similar sound to Ochu with a low frequency pulse predicting an oncoming threat … the sounds of a disturbed lair. An excellent track but then they were one of the highlights on "Nördostra Malmö". Värtgärd are Harsh Noise Wall. Arkhe deliver "Vrakloge" (Wrecked Lodge), a track that was part of last years MuhMur Radio session.  A Rotorik Sound (I just made that up), the sound of fast cutting blades and tempered frequency - it all creates for an audio-visual carnage. Beautiful. The tape finishes with the dubiously named A Feast For Vultures. "The Prodigal Returns" has the sound of early Broken Flag releases with lots of crackle and distortion - there are voices in the swirl too, but unfortunately the tape ends and cuts the piece off in its' prime.
An excellent compilation, I still want to hear more Vit Fana and sample some Puce Mary, and there are some priceless classics in there too - Arv & Miljö, Ochu and Arkhe springing to mind. I think the cassette is limited to 250 and probably close to selling out but try Styggelse (www.alfarmania.se) Its worth it.
Posted by Steve at 18:09