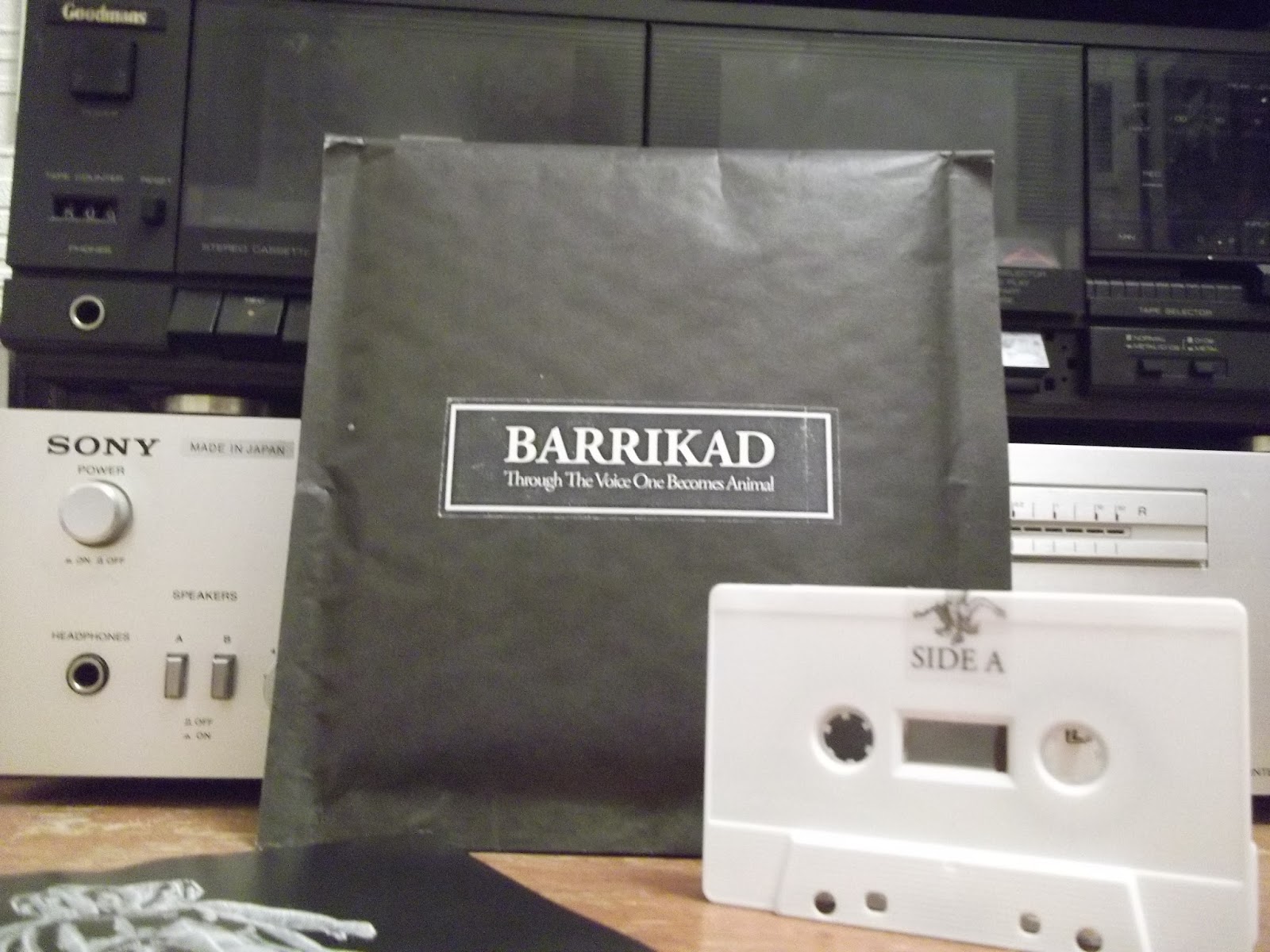 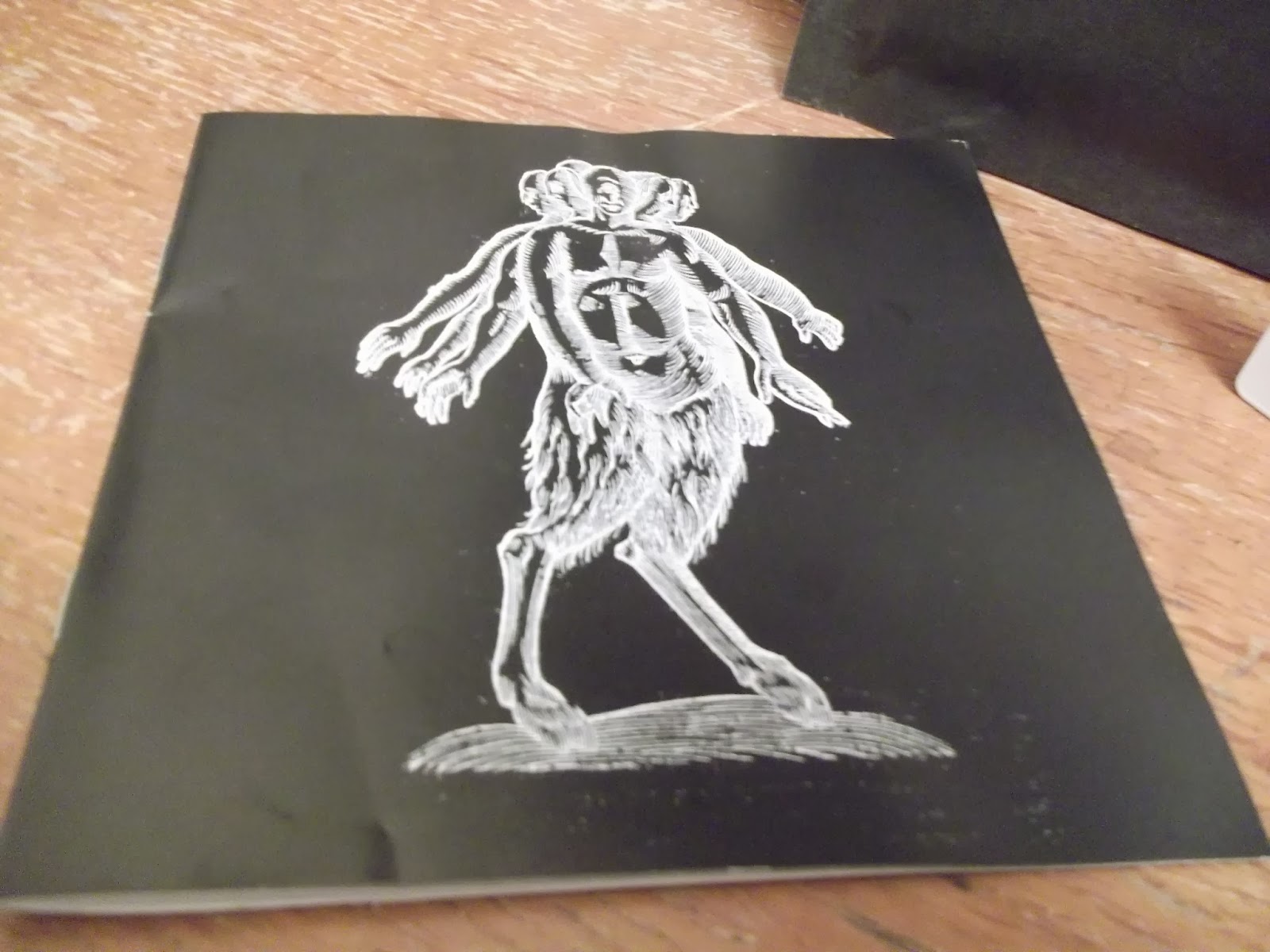 Have just spent a pleasant while listening to the latest release from Swedish noise makers Barrikad.
I first came across Barrikad about ten years ago through the excellent compilation "Krimkall" a double cassette release from Krimljud and then a year or so later they were part of the Segerhuva crowd and appeared on the "Sweetness Will Overcome" compilation CD. The Barrikad sound back then was a tsunami of noise, full on distortion with non-empathetic warbling. Very little to separate Barrikad from the masses of Scando-noise projects that existed at the start of this century apart from some nice and neat tape splicing and sample edits …
Ten years after and Barrikad - the sound of Barrikad - is more focused and refined. Personal and directed.
"Through The Voice One Becomes Animal" is a C15 cassette released by Nil By Mouth Recordings. ("Is It Not First Through The Voice One Becomes Animal?" is a question asked by Gilles Deleuze in "Thousand Plateaus:Capitalism And Schizophrenia"). Two single pieces on each side … beginning with "Freedom Is Only Possible In The Struggle For Liberation", which I believe to be a statement by Ulrike Meinhoff. The piece features spoken soundbites and sloganeering by members of the RAF as well as news reportage. The sound is crunching analog synthesizer with a ticking clock offset against a mechanical pulsebeat. Very Deutsche PE and old school industrial. A well constructed piece with hammer against metal a sound I last heard on a news report from the frontline of demonstration in Kiev, the Ukrainian street beat - the sound of the barricade.
Side two is very similar in sound and construct. "Utanför Det Samhälle Jag Tvingas Vara En Del Av" (or "I am forced to exist outside this community" … apologies if I am way out, my Swedish is a little rostig these days) has the same mechanical ticking, the factory rhythm but this piece builds to the sound of anarchic beatings, all with a narrative in an unrecognisable foreign tongue.
The cassette is packaged in a 7" pouch with 24 page booklet printed in both Swedish and English, there is some sort of Barrikad history / manifesto alongside writings by Barrikad. Sleeve notes that would make Adi Newton jealous! I would go as far to say that this release is perfect.
"Through The Voice One Becomes Animal" has been released before but in ultra ultra limited editions on 10" lathe cut disc and on cassette by Exlibris Nordén.
I am now discovering Barrikad and their "We Make Nihilists Smile" CD that Phage Tapes released in 2011.

Nil By Mouth Recordings are a new label to me, the name cropped up on Chondritic forum board and also SI board but I was slightly put off by the releasing stuff by folk with names such as The Vomit Arsonist & Chloroform Rapist .. I am slightly snobbish when it comes to names but with so much "stuff" being released I have to pick carefully .. now after listening to Barrikad I discover they have released great names like Altar Of Flies, N. and Fear Konstruktor in the past and have just put out cassettes by Arkhe and Uncodified. I have sent off E Mails to Nil By Mouth Recordings but have yet to get a response. If anyone from NBM is reading this please get in contact.
This cassette is essential : www.exoteric-zine.com/nilbymouth or get in contact and buy from Barrikad via Discogs.
Posted by Steve at 21:02