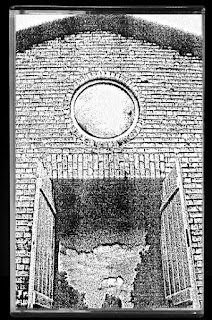 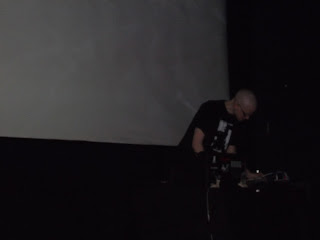 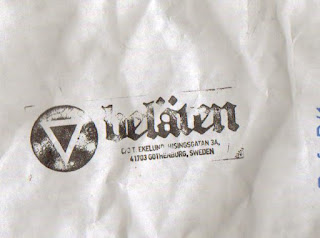 One of the finest labels to emerge during 2012 has been Belaten, a small cassette label based in Gutenberg, Sweden and operated by Th. Ekelund. 2012 has been a busy year for Thomas, with his Trepeneringsritualen project releasing a number of fine tapes, EP's and album and playing live across Scandinavia and the U.S. he still manages to deliver the goods with Belaten.
December sees a brace of releases. Terence Hannum (of Locrain fame) and Poena. Poena is a Swedish project formed by Kristian Olsson and Christian Godin. Poena provide the cassette "Likboden". A one sided 30 minute live recording from earlier this year. "Likboden" was recorded in a derelict morgue on the outskirts of Sundsvall. Likboden translates into English as Mortuary. Poena use material found within the walls to create a ritual piece, a sort of banishing with metal and chains, with wood and the human voice. It is a dark and (to these ears) a deeply pleasurable listen. It is only natural to compare the sound to early albums released by Nekrophile Tapes, and the 1983 LP "Ligeliahorn" by Metgumbnerbone...also whilst listening I was reminded of the sound of early Hunting Lodge. File under Occult or Ritualistic.
The nature of location gives the sound a booming, echoing "lost in space" atmosphere. The recording is crystal clear. A classic release from a project I am keen to hear more from.
Kristian Olsson is also part of Alfarmania, Kadaver, Survival Unit and Ghoulbog to name but a few - he also produces some fine solo work...directly after playing Poena I played the excellent 2003 CDr "Laudanum". He also operates the Styggelse label. I recommend visiting his website - www.styggelse.blogspot.com