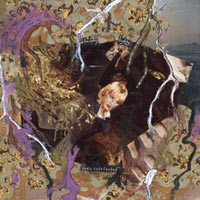 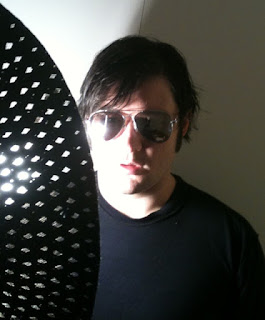 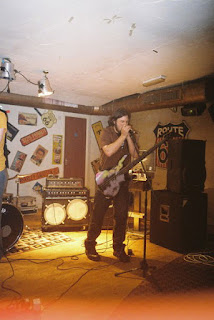 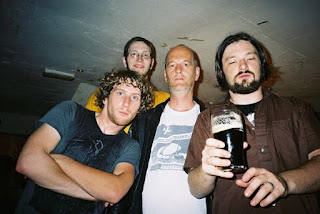 I have just spent a pleasant while listening to Failing Lights latest LP "Dawn Undefeated" on the German Dekorder label. (Dekorder 063). This LP does have a sense of sadness ~ of melancholy. Firstly in the sleeve, the peeled back 1950's wallpaper showing cracks in the plastering and old photographs. Derelict building deep in the woods, a blond haired girl looking lost by a tractor tyre(?). The track titles; "(We Don't Want A) Death In The Home", "Clear Body At Dawn", "First Made Laws" also carry a question of sadness. The sound is complimentary to all of this. Lonely piano played through a myriad of effects and moribundia, a randomly strummed bass guitar, insects eating away in "To Spring" and the reverse piano treatment in "Mirror Beneath" are as compelling  sounds as they are works of genius.
Not what I was expecting (as the great Crispy Ambulance once said). Failing Lights is a new name to me, I didn't realise they had been releasing stuff since 2005. I don't get out much. Failing Lights is the solo project of Wolf Eyes and Hair Police main man Mike Connelly. I don't know what I was expecting. I bought the LP after reading about it in an "end of the year" review just before Christmas. I bought the LP out of one part curiosity and one part necessity. Whilst having a Harbinger Sound night here at Hartop Towers (that's nothing grand...just me, a six pack of Grolsch and a pile of records) I "re-discovered" the excellency of Hair Police (and Family Battle Snake for that matter), and I remain blinded by the brilliance of this LP.
"Dawn Undefeated" ends with the epic "Our Wild Flight"...a paranoid and ghostly affair, with fast distorto guitar chase sequence style sounds leading into plucked violin a la Throbbing Gristle's "Weeping" from "D.O.A.", and then the whole album being buried beneath the soil ...

Failing Lights "Dawn Undefeated" on Dekorder Records, one of the finest releases of 2012.
www.dekorder.com/063.html Apparently the LP was cut at 45rpm but playable at any speed...this "review" is coming to you at 33 and a third....(traditionalist)!