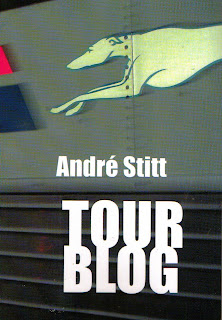 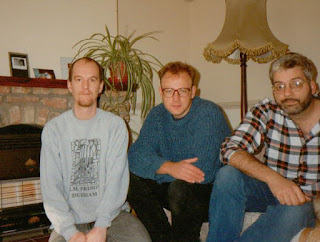 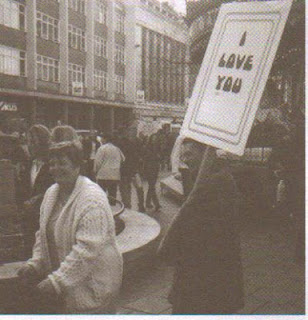 Matters have gone all Stitt since meeting the great man a couple of weeks ago at Spacex in Exeter (See the John Court entry). Andre gave me a copy of his book "Substance", then after a chat with Steve Underwood (Harbinger Sound specialist and big Stitt nut) I discovered the book "Small Time Life", then his book documenting his 2006 tour of the United States of America with fellow artist Matt Cook as The Panacea Society and the CD album "We Don't Dig Doom". "Small Time Life", "Tour Blog" and the CD are all available at a very reasonable price through Amazon and the Andre Stitt website. www.andrestitt.com/  .

The book "Tour Blog" and CD are essential companions, both act as aids to each other as the recording of the album takes place during the 2006 tour. Rather like the Haters book "Drilling A Hole Through The Sky" (next book on my pile of reading matter - sorry Mark but Julian Cope's "Head On" is slowly slipping down the pile) I think the "Tour Blog" book and CD should be sold together, as a package ~ listen whilst you read .. or at least use as reference.
Anyway.
"No Sex, No Drugs, No Rock 'n' Roll. Just freak beat, psyche-garage, prog-techno and artiness ... Who do they think they are these performance artists who want to be the new Golden Gods of Art Rock? Find out as you join The Panacea Society on their 2006 North American tour".
That's the premise of the book.
"How many performance artists does it take to change a lightbulb"?
"I don't know, I left before the end".
"Tour Blog" begins in Cardiff on April 4th 2006 and ends in Cardiff on May 1st 2006 and in between is a rollercoaster ride through American Cities and towns, meetings with remarkable men, anecdotes and flashbacks from Andre Stitt's previous performances in America and a rolling commentary of what Andre eats. Some of his descriptions of his meals are mouth-watering ~ OK, sometimes Andre eats seafood, but his veggie diet is to be commended! And now I know where all the best vegetarian restaurants are in New York City ... if I ever get there....
I was completely unaware of Stitt's musical performances and history. I knew of the CD he released with Daniel Biry on ND Records (I've never heard it) and the track "Dogz In Heat" (Hey soldier - who's fuckin' your wife tonight?) he provided for the audio edition of ND Magazine "ND #7", but The Panacea Society and Stitt's 1970's punk band Ask Mother are new on me.
Throughout the 2006 tour Andre is meeting up with and staying with old friends, friends from the early 1980's when Andre was a performance artist and mail artist. He repeatedly apologises for his time back then when he was drinking and drugging and wearing the "asshole mask". It's written with feeling, honesty and warmth. That his friends have stuck by him, stuck with him, seen him through to the other side. Fersure. That is one thing with "Tour Blog"...it has to be read in a Belfast accent.
Andre and I share a mutual friend, that of Dan Plunkett, now owner of the record store "End Of An Ear" in Austin, Texas. It was Dan that turned me on to the work of Andre back in 1983/84. (With the help of Tim Bayes), so reading about Dan (the big old gay Texan) and the Panacea Society gig at his shop brought a smile to my face.
During the tour Andre and Matt record the album "We Don't Dig Doom" at studios in San Antonio with Bob Catlin...the old Psychic TV bass player, and in Seattle. The book tells the story of the tracks, that's why I think the two make a great companion. The album is very much guitar lead psychedelic rock, there's a lot of "Nuggets" and/or "Pebbles" influence in there. Both Matt and Andre's musical taste are eclectic so the songs are not bound to a genre. Naturally (well, naturally for me) I am reminded of the Virgin Prunes .. it's the strong Oirish accent fersure .. even The Prunes after Gavin and Guggi left. There are hard electronic rhythms a la Portion Control on "Pimps & Holes" and the electronic sound of the reformed Throbbing Gristle floating all over the album. The Panacea Society do a version of "Discipline" in their live set. "International Teeth" has a motorik krautrock beat and vocals. "We Don't Dig Doom" is a great listen, a dance and sing-a-long driving in my car type of album. It is on Dog Fingers Records.

Browsing the Internet I looked up the origins of The Panacea Society and spent time reading a fascinating story of a cult / charity set up in Bedford (UK) in the last century....excellent stuff, I recommend a read. Also, The Panacea Society released a clear vinyl 10"EP for a performance in Bedford....if anyone has a spare, please get in touch.