When We Have Each Other We Have Everything 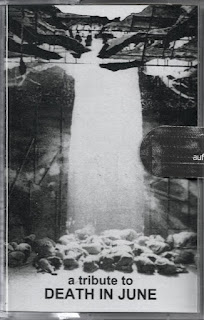 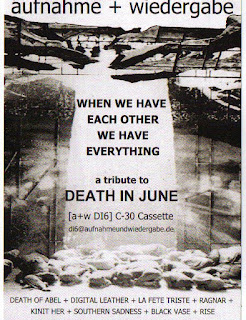 Here's a strange cassette I picked up the other day. I didn't know of its existence until I was browsing the Kinit Her discogs listing and came across this "tribute" compilation cassette. I am a collector of all things Kinit (as mentioned throughout this blog ... anxiously awaiting delivery of the new Circulation Of Light tape) so thought I'd chance my arm and ear with this.
I am partial to a little Death In June, I know that in some folks eyes that makes me some kind of fascist or Nazi sympathiser ... but I can live with that. They came from the mighty Crisis and their first three singles and their "Nada!" album are classics. I gave up buying Death In June when I bought the "Born Again" 12"EP in 1985, at that time I had a friend who lived up on John Nash Crescent - "Little" John Price (unfortunately he has passed away) and he bought into Death In June and their "Brown Book" and "The World That Summer" albums and the Aryan Aquarians LP, I just couldn't get it myself so left Death In June alone...but I recognise the titles of a couple of tracks on this compilation and I'm keen to hear other folks' interpretations.
A lot of the artist names on this tape are new to me too, in fact I have only heard Ragnar and Kinit Her before - and Ragnar as a member of Gerechtigkeits Liga and not as a solo performer, so I can't help with information on most stuff here - Discogs doesn't really help either.
Side A kicks off with Death Of Abel covering "Runes Of Men". It's all acoustic guitar and glockenspiel. Those familiar with early cassettes put out by Deleted Records back in the 1980's may find this track has a similar sound. Digital Leather cover "She Said Destroy" - virtually an acoustic karaoke cover by a chap with an annoying voice .. it has heavy synthesized strings at the end trying to be all apocalyptic. La Fete Triste sound like Swans, a band trying to sound like Swans doing a Death In June cover. I was beginning to think by now that this is a tape of straight forward covers, no re-interpretations or how I imagined a "tribute" project would be approached, but in comes Ragnar with a wall of guitar feedback covering a haunting cello and singing with one of those "black metal" growls - at last, something interesting.
Kinit Her open side two with a slow funereal paced acoustic folk song. "Hail The White Grain". I have no idea from where this song comes unlike "Fields", a classic number from the 1984 "Burial" album. Black Vase make this track electro EBM - I can see myself shuffling along to this on the Slimelight Dancefloor, the cassette has picked up again. Southern Sadness provide "Ku Ku Ku" opening with some David Duke type ranting moving to playing the DIJ track through a couple of distortion boxes and tweaking an effects pedal. A Rise version of "Fall Apart" ends the cassette. This track is awful. (I am sorry).
The cassette is released by German label Aufnahme & Wiedergabe (Recording & Playback) in an edition of 200. It's professionally copied with foldout sleeve and is a C30 - which in this case is a good thing.
Like I mentioned at the start, a strange cassette and if I had been asked I would have supplied an interpretation of "Black Radio" .. my favourite Death In June track.