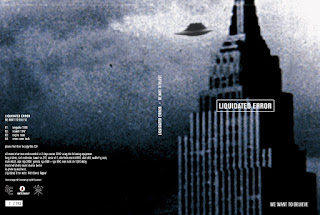 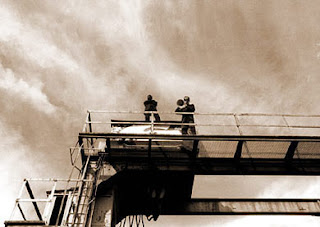 In the beginning there was Gerechtigkeits Liga, in the late 1980's they disbanded, at the turn of the millennium founder member Till Bruggemann reformed GL as a two piece with Berlin based artist Ragnar. Recently I have been playing alot of GL in preparation for the upcoming "MuhMur On The Radio" escapade. Back in the mid 1980's I was living in Manchester and on a Sunday afternoon there used to be this excellent programme on BBC Radio Blackburn hosted by Steve Barker called "On The Wire", he played some pretty experimental stuff (including Carnifex Recordings tapes) as well as being a great show to hear Mark Stewart and ON-U Sound releases ... hence "Lee 'Scratch' Perry On the Wire" track. I really want to call my upcoming foray into radio "MuhMur On The Wire" but because there is now a poor publication with the same name and folk may misconstrue and think of association I am stuck (at the moment) with "MuhMur On The Radio".
Anyway - I digress.
Ragnar resides in Berlin and performs as a solo artist and DJ, as well as being active in a variety of projects..one of those projects is Liquidated Error. "We Want To Believe" is ten years old, recorded in 2002 and released the following year in a limited edition of 193 on their own label. 4 pieces all with an extra terrestial concept/theme. The album starts off with "Tunguska 1908" (the sight of a comet/spaceship landing?), and the random electronic sounds do make the feel very Soviet. Experiments with early synthesizers creating alien landscapes. (The kind of thing I would have heard on an evening round at John Everall's house 20 years ago). "Roswell 1947" follows, at 20 minutes in length this piece is more cognitive in construction (but then again not necessarily so) with vast sweeping synthesizer sounds - deep space, desert landscape moving into communication style electronica...pulsations, bleeps etc. "Roswell 1947" is the main beef of the album and a damn good track. "Engine Room" follows. A short two minute or so attack of pulsating alarm with grinding, gyrating and exploding machinery surrounds.
The final piece "Never Come Back" is built around a rhythm, a rhythm where sounds drift around constructing and deconstructing. It doesn't quite work - it ain't a good rhythm .. the last thirty seconds where the track dies and disappears is perhaps the best moment ...

Liquidated Error like Gerechtigkeits Liga and the solo project work of Ragnar need to be discovered, I'm having fun doing so. Visit the Liquidated Error website for downloads and physical product. www.liquidatederror.de

Pictures.
1: "We Want To Believe" CDr artwork.
2: Liquidated Error. (Picture from their Website).