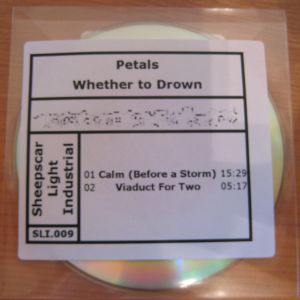 Just spent a pleasant while listening to the latest release from Petals. "Whether To Drown" is a two track 3"CDr released by a new Leeds based label; Sheepscar Light Industrial.
I do like 3"CD's, I have a pile of them - there's a great series of them released by Grey Park on the 287 Lattajjaa label. Small, compact and none of them lasting over 25 minutes. I can't go a month without playing the Genesis P-Orridge/Hafler Trio "Slave Priest" 3"CD! I would love to release one myself. Anyway, but I digress.
I have been listening to a fair amount of Petals lately, I have been liking a lot of what I've played so when I saw this release being advertised for 30 bob I knew I had to have it. I equate the sound of Petals to that of Plurals, Baraclough and Astral Social Club. Drone Music. This release does not disappoint; "Calm (Before A Storm)" is a layering of heavy keyboard slow drone. There are oscillations in there, synthesised noodles breaking through the drone wall, but mainly it is heavy (organ) keyboard drone. Hues of Popol Vuh and then again a smelting of Rick Wakeman. Progressive/Modern Progressive? Now I know some folk out there will say "there's nowt wrong with Rick Wakeman" - but I am here to tell you .. "Oh yes there is"! The track morphs and melts into a lovely surround of tonal bliss.
The track must be a live recording, the levels do go a bit awry in places...it may not have been mastered.
"Viaduct For Two" is the reason for listening to / buying this 3" CDr. (Superior Viaduct - A little nod to our Ohio readers there). The sound of bowed and stretched violin strings with an ominously low throbbing underbelly. Glorious.
With releases so far from Petals, Aqua Dentata, Midwich and Daniel Thomas Sheepscar Light Industrial is becoming a nice monitor for the experimental subculture of DIY electronics in the UK.
Pay a vist to www.sheepscar.blogspot.co.uk there's a link to buy this release.