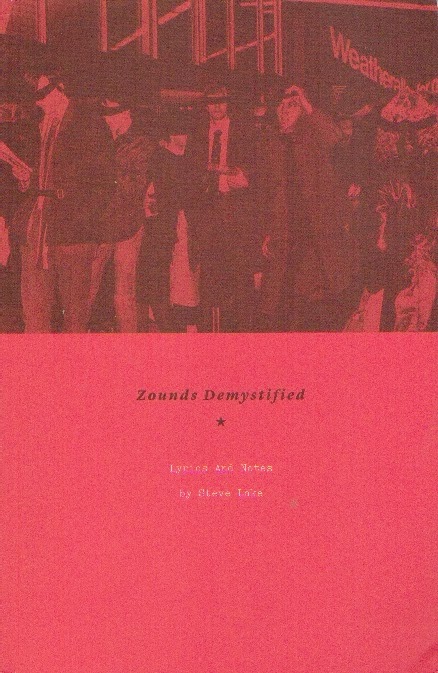 Book of the year, so far. An unputdownable addictive and great read. This book came recommended, recommended by a chap who likes Zounds. I have no idea what Zounds sound like … chances are that I have heard them in my dim and distant past, I have spent my time in anarchist squats and dens of iniquity listening to the sounds of anarchy and revolution .. but it all blurs and I wasn't a big fan of nigh on all of it. I am not a big admirer of the Crass Records discography. Crass (of course) up to and including "Christ, The Album", The Mob, D.I.R.T., KUKL, Omega Tribe (were they on Crass)? They are all OK but I could not abide Conflict, Rudimentary Peni, Poison Girls, D&V and Flux Of Pink Indians .. but I am uncertain about Zounds, this book has their discography listed…the sleeves look familiar but I couldn't recognise a song. And that is one of Zounds's problems…they were classed as a "Crass" band.
The book is written by Zounds founder and main songwriter Steve Lake. It charts his time as a student attending free festivals in the early-mid 1970's to forming a band and playing the festivals. Steve leaves the 'shires and settles in London and falls in with the Fuck Off Records crowd - The Mob, Androids Of Mu, Here & Now etc … setting up the "Weird Tales" free gig tours of the late 1970's by word of mouth and other peoples telephones. Steve is a great storyteller, and I didn't know the early history of Zounds was entwined with The Mob.
1984 - I loved The Mob. Living in a squat in Hulme, Manchester and their "Let The Tribe Increase" became the ideal hot knife and magic mushroom soundtrack. We would play "Witch Hunt" fucking loud and off our (collective) tits before hitting the pool tables at the PSV Club. A bizarre ritual but then again strange days.
It was whilst touring with The Mob some one told Steve that he should check out Crass and their label, so he did and Penny Rimbaud liked what he heard so they agreed a 7" single release - their first release "Can't Cheat Karma". Recorded at Southern and featuring a session drummer - Crass took control and told them their drummer was useless so they put in a session drummer - at this point I would have told them "thanks but no thanks"..but Zounds carried on - much to Steve's regret. This reminds me of a time when (as part of IBF) I was recording at the Recloose Org studios in Malt Street (New Cross) for the "Songs Of The New International" compilation LP. The track we were recording used a Dr Rhythm drum machine which Simon Crabtree (who was "producing") didn't like, so it was suggested the sound was given extra "oomph" with live drums, so I sat behind the kit and bashed away. I was told I was out of time so Simon suggested that Steve Tanza (of Bourbonese Qualk) should sit behind the kit! We (of course) said no and the sound of the rhythm was left to the machine.

Zounds only released the one single on Crass Records but they will always be known as a "Crass" band. The book goes on to tell the stories of their time on Rough Trade Records and playing Germany for the first time….The time they were in Berlin the same time as The Clash (1980 - "London Calling" tour) so they decide to pop in and see the boys have a few beers and chat about punk & London etc. They show up at the venue to hear The Clash soundchecking and then finding out that it was the roadies playing. The Clash don't soundcheck, they stay in the hotel getting coke'd. The Clash - didn't like 'em then…don't like 'em now! Being on Rough Trade Records in the early 1980's meant higher profile gigs…and a tour with Theatre Of Hate. Needless to say Steve and Kirk didn't see eye to eye! Inter-band squabbling, wanting to write songs of love and (personal) revolution and always being drawn into the politics of being a "Crass band" clutching at straws that finally break the camels back, stories told with energy and great humour make this book a great read. I ending up empathising with Steve, wanting to just cut the crap (sorry about The Clash reference there) and just play his music live. Play gigs and then sleeping in a warm bed not having to sleep on cold floors or in the back of a van.

The late 1980's and Steve has a rest - a break and then re-energises to bring Zounds back. The punk market is profitable at last! CD reissues, Blackpool rocks etc. Fresh ears, new audience and Steve deserves it. A little like TV Smith of The Adverts whose tour diaries volume 3 + 4 I am now reading.
Like I mentioned at the beginning, I don't know Zounds but I do like "musical" autobiographies and this one sits at the top of the pile. Will I go out and buy some Zounds? If I see the 7" secondhand then maybe …

The book is 160 pages, and only £5 from Active Distribution.