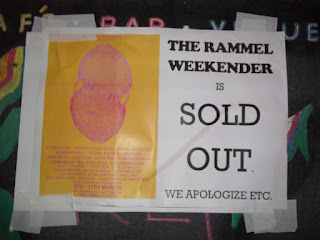 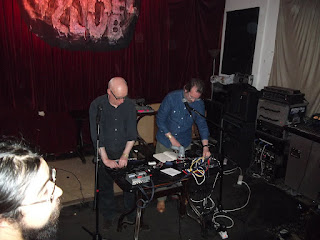 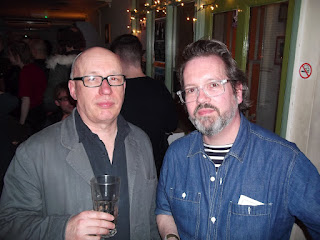 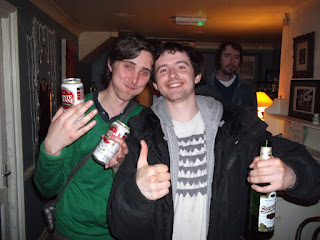 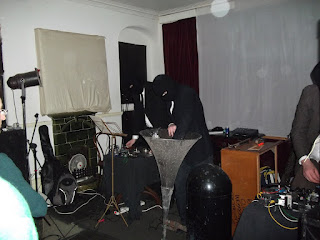 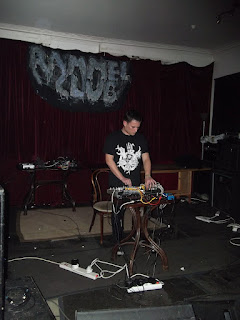 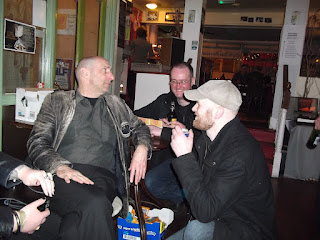 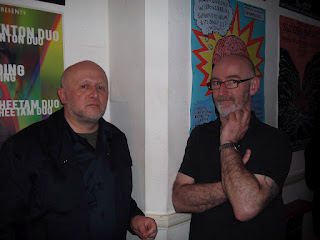 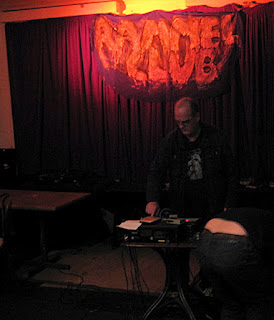 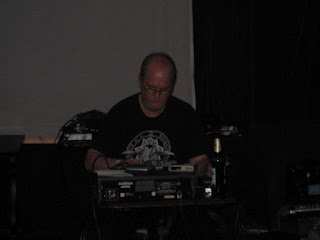 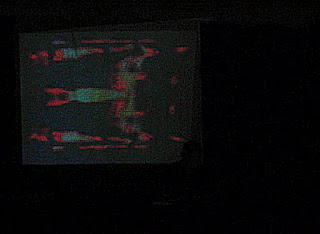 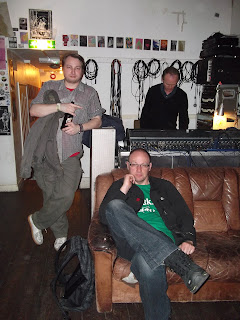 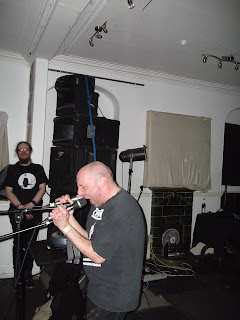 The 46th Dieter Muh gig took place last weekend in Nottingham. I like playing live in Nottingham, great city, great football club (there's only one), and always a great audience. This was Dieter Muh's 4th live appearance in the great city since 1994.
The Rammel Club is situated inside The Chameleon Arts Centre on Market Square. Very central. The Chameleon has that Anarcho Eco (no relation to Umberto) feel about it, a little like how the "1 in 12 Club" in Bradford used to be 20 years ago - but operated by friendly gangsters and not a co-operative.
I was invited to be part of the Rammel Club / Harbinger Sound "weekend festival of blah". A three day event of varying sound. I unfortunately missed the opening evening with Patrik Fitzgerald, Mark Durgan & John Wall, Kogumaza, Design A Wave, Makakarooma and Blood Stereo. I arrived on the Saturday to witness a blistering live set of intricacy and noise from Spoils & Relics. At this point I will mention that the sound quality inside the club is spot-on thanks to a PA mix-meister called Simon.
Sleaford Mods followed. A poet and a guy with a laptop that holds some great bass line lead tunes. Not art, not noise just brutal realism wrapped up couplet and an owd boy drawl. Clever stuff...not funny...not comedy like John Cooper-Clarke or pretty like Peter Um. Hard hitting and 100%. I can believe the Sleaford Mods.
I managed to catch a quick interview with Jason (of the Mods) after the gig on his way to the bar. "Why did you chose Sleaford Mods"? "I wrote my first song in a pub in Grantham, and Grantham Mods sounds shit". If you haven't heard Sleaford Mods yet....do! I don't think it's just a Lincolnshire thing.
Bill Kouligas was on hand to provide a weaving electronic pattern and coat it with texture and effect. Beautiful stuff, not too far from (say) Bruce Gilbert to these ears. I stood transfixed. Storm Bugs. Storm Bugs. The band I wanted to see the most...and they played "Car Situations". Beautiful sound that took a little while to grab (me), getting used to vocal treating and looping took a few minutes but once the set started to move it was an honour to experience.
The organisers had promised Special Guests for the Saturday, and they don't come any more special than The New Blockaders, playing their final live show before Berlin in a couple of weeks. Around 100 folk saw TNB wreck the stage with wood, metal, tools and glass. After they left the stage, in the silence everyone was wearing a smile. Heatsick closed the evening.

Sunday was different because I was playing, daytime and early evening drinking had to be kept to a minimum and when the day is spent with Idwal Fisher, Phil Taylor, Paul Walsh and Steve Underwood that is a hard task! Also my concentration is on the performance and not so much the bands that played "early on". Surfacing had some promising sounds going on, and SWLLWS sounded like a cross between Dead Can Dance and New Order in parts. Nacht Und Nebel created some dark swirl that forced me to buy a cassette from the merch' table so I can discover in "comfort". These Feathers Have Plumes is the solo project of London based musician Andie Brown. (I think that is how it is spelt). These Feathers Have Plumes (awful name) created a sound of beauty featuring manipulated strings (cello & guitar...I think) and wine glasses filled with varying quantities of water being played with a violin bow. It was a stirring sound - again PA quality was superb - invoking the early work of Organum.
The Muh set was next - hard sound to follow but the audience were "up for it"! I played to the films of Tim Bayes and Simon Kane, around 20 minutes mixing bowed cymbals, Japanese tsunami sounds, the London Underground, German Overground, high heels and Buddha Boxes together to create some picture I had in my head. A couple of weeks ago I went to a "Cats Protection League" coffee morning in St Marychurch (Torquay) Parish Hall, show the kids some cats and browse over some secondhand bric-a-brac where I found a small Dictaphone with tape! It worked too....that find played a large part in the Rammel performance.
I enjoyed the set - I could hear what I was playing crystal through the monitors, and I was making the floorboards shake. For the audience - I thank you and the kind words afterwards chippered me up...I was touched.
Phil Julian followed with his reverse noise set. Most "noise" artists start slow and build to a crashing HNW...not Phil...he attacks the senses from the off and deconstructs (decomposes) his sound leaving the audience stunned and feeling a few inches shorter than they were 20 minutes earlier. Most folk wanted to see John Wiese so I did the "honourable" thing and minded the door and merch' stall for the Rammel Crew - it sounded good from the floor below...lots of ringing bells and smoke alarm noises.

Penultimate act was Con-Dom. A rare UK live performance and treat. I have played a couple of gigs in the past with Mike (Dando, AKA Con-Dom) and it has always been a pleasure. Tonight's performance was an act of brutalism, of struggle and of violence. A lot of vocal treatment used made it hard to understand what Mike was shouting, but the sheer physicality of his live performance was simply stunning.
Bong ended the evening reminding us all why punk was invented.