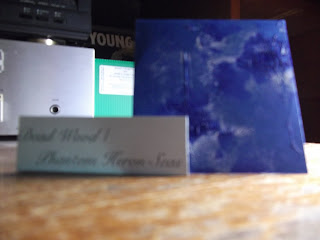 A couple of weeks ago I went to The Great Hall in Dartington to watch Annie Gosfield perform the world premiere of "Floating Messages And Fading Memories". It was a very enjoyable evening in a great venue (the place where 23 Skidoo recorded "The Culling Is Coming") but the sound produced did not live up to the sound promised. "Floating Messages" was to feature the sound of clandestine radio transmissions of European resistance groups alongside radio static, shortwave oscillations and Morse code. And yes the sounds were all there but they were superseded by strings and wind from the Athelas Sinfonietta the minimal guitar work of Roger Kleier and the drums of Chris Cutler. It was a rich and rewarding performance, and to have Chris Cutler play in your back yard so to speak is nowt to complain about...but the sound I was looking for was lost amongst the instruments. "Microbes:Parts 1&2" by Dead Wood and Phantom Heron Seas delivers the goods where Annie Gosfield failed. No masking, no pretensions, the release could easily be called "Floating Messages & Fading Memories".
"Microbes:Part 1&2" is a 3"CDr released by the Dead Sea Liner label in an edition of 45. The major part is "Part One" with its' radio static and crackle and visions of messages lost in the ether. To Arecibo by Brian Williams came to mind as did a track Dieter Muh produced back in the 1990's called "S.O.L.A.S." (Safety Of Life At Sea). With the sounds of the static coming in waves the piece(s) have a very nautical feel. If you like the "Shipwrecks" cassette by Andreas Brandal then you will like this CDr.
"Part One" ends on a great loop, rhythmic, hypnotic before developing into "Part Two" and its' building static / dead air space sound. At times it has an underwater feel about it, the creaking and the oscillations/undulations. Excellent stuff.

"An Underwater Experience Would Come In Handy" (I have had this on the brain since Wednesday night)!

This is the future sound of Dorset and great follow on from the "Sunshine Daily Commercial" 7" flexi-plate release that came out in the autumn on Dirty Demos. Both need to be heard.
Contact www.deadsealiner.co.uk straight away, at 45 copies (mine was #42) this beauty will be gone fast.
Posted by Steve at 20:17