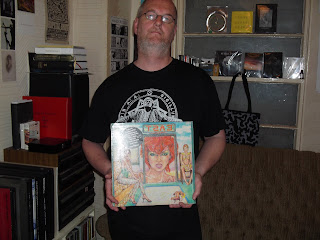 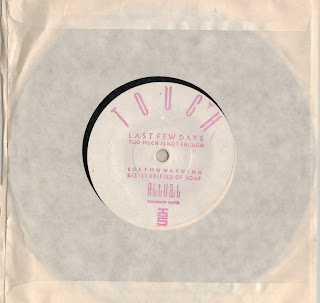 A few weeks ago I managed to get hold of a copy of "East" a compilation album released by Dead Good Records of Lincoln back in 1980. (Cat no:Good 1). I liken this slab of vinyl with the 7"EP "Too Much Is Not Enough" by Last Few Days on Touch Records. Both records I was told by friends and owners of the aforementioned vinyl (pre-internet days, mind) that because of their rarity and scarcity I would never own.
But now I do.
"East" is a great album. 31 years after release and the tracks still sound fresh. "East" is compiled of bands that were aligned to either Dead Good Records or Lincoln's "other" label at the time; Company Records. Company Records address was Fort Barnes on Rookery Lane, Lincoln, and when they re-issued Robert Rental's "A..C.C." 7" I went to hunt the place down hoping for some posters or freebies but it just turned out to be an empty warehouse, a mail drop-off address. Disappointed.
At the time of release I was quite disappointed with "East", I remember "slagging it off" to friends and anyone who'd listen. At the time I thought it was an LP to showcase the local bands of Lincoln, but myself (in the band ESP Disk-rd), my brother-in-law's band Collide and probably the best band in Lincoln in 1980, The Void, were not invited to appear on the LP. Instead there was a band from Nottingham, a band from Mansfield and two bands I'd never bloody heard of. I was 18 at the time of release. Thirty years later and I love the LP!
The Cigarettes have three tracks on the LP. The Cigarettes were (at the time) probably Lincoln's most famous band having become John Peel favourites. Despite their mod attire The Cigarettes were quite "punky" and the tracks are very reminiscent of The Cure circa first album. Also providing a trio of tracks are Nottingham's Fatal Charm. Fatal Charm played Lincoln a few times, their biggest break was probably supporting The Psychedelic Furs at The Drill Hall. Wasted Youth just never turned up! Unlike The Cigarettes, Fatal Charm have a more polished "edge" to their sound - it's post-punk pop, guitar driven songs that are great to listen to. "Stoned Loving" standing out above the rest. Lincoln's most famous Punk Band, Pseudo Existors give us two tracks. I was never a big fan of The Pseudos (as they were known locally) and never saw them live - tales of violence and a hard faction called "The Pseudo Army" put me off going to their gigs. Going to punk gigs in Lincoln in 1978/79 was too much like putting "your life in their hands" anyway without being thrown about the room by Lincoln punks. If I'd known that the aforementioned "army" was Tim Bayes, Crabby, Malc Miller and a few of their mates then I'd've probably gone! "If I knew then what I know now" as Crispy Ambulance once said. Whizz Kids give two offerings, strangely slower numbers than the "PAYE As You Earn" EP, Whizz Kids mature shock probe. In my opinion Whizz Kids were the best live band in Lincoln in 1978, I saw them loads as they were the resident band at AJ's on punk nights. If a group didn't have a support then it was Whizz Kids, Lincoln's answer to Slaughter & The Dogs. B. Movie also supply two tracks, guitar based post-punk rock, pre Stevo and stringy synth chords. "Man On A Threshold" and "Refugee" - great songs. I saw B. Movie twice. First time at a venue called "The Cornhill Vaults" (a cellar bar I have been barred from....twice) supporting The Disco Students (I think) and I really liked their sound, then a couple of years later they played "Futurama 3" and were lightweight synth-pop-pap. Shame. "East" captures them in their early stage and at their best. Singular tracks are provided by - Half Life. Half Life were a bunch of school kids from Louth (pronounced Lau-erth). They supported Collide a couple of times at The Cornhill Vaults. "Steve Biko" a political number with choppy guitars and flat singing and probably the best on the album. Sincere Americans end side 1 with "Contact". Again poppy punky new wavey type of song from a band I have never heard of. Then and/or now. Were they from Lincoln? I don't recognise any of the band members names. The inner sleeve gives all the relevant information. Finally there is Vick Sinex & The Nasal Sprays who I think were the owners of Playground Studios, A 4-Track studio in Wragby (Lincolnshire) where the whole LP was recorded. Again, at the time this track really annoyed me because the 3 minutes of track time could have been me or Collide or The Void or XS Energy or Sinking Ships or another great Company records group like Com-Sat Angels but no (as Colin Newman once said) we have Vick effing Sinex. Thirty years later and it's a bloody good track. "High Rise Failures (Dub)". That is High Rise as in getting off ones' tits on drugs not tower block. Lincoln only had one tower block back in the 1970's, in Swanpool. Many a Sunday playing in the lifts there! Anyway - "High Rise Failures (Dub)" sounds like The Door & The Window. Excellent stuff.
I love this album, it makes me want to go back to Lincoln.
Sleeve is still shite though.